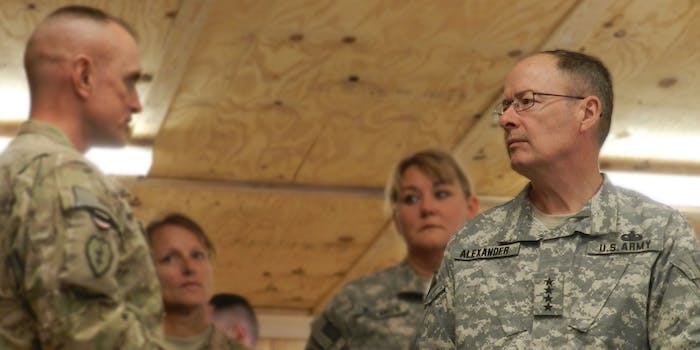 It's not like the last two went well for him.

General Keith Alexander apparently got pretty busy right after the world discovered that the National Security Agency, which he heads, has back doors built into much of the Internet’s encryption.

He has cancelled his spot as a keynote speaker at a cybersecurity conference, three days before he was supposed to go on.

The Dutch telecommunication company KPN announced Saturday that Alexander, who was scheduled to speak at their Cybersecurity Congress, wasn’t going to make it, citing pressure on his agenda.

Two days before, the world learned of one of the most damning NSA leaks yet: that the agency has much stronger abilities to break encryption than almost anyone realized, possibly built into many security companies’ programs. Other leaks have alleged that the NSA shares intelligence with its equivalent agency in the Netherlands.

Alexander has fared rather poorly at hacker conferences since former NSA contractor Edward Snowden leaked a slew of agency documents. Def Con founder Jeff Moss formally uninvited Alexander in July, though he had been the keynote speaker the year before.

When Alexander spoke at the Black Hat conference two weeks later, the audience booed and heckled him, accusing him of lying to Congress and squandering its trust.