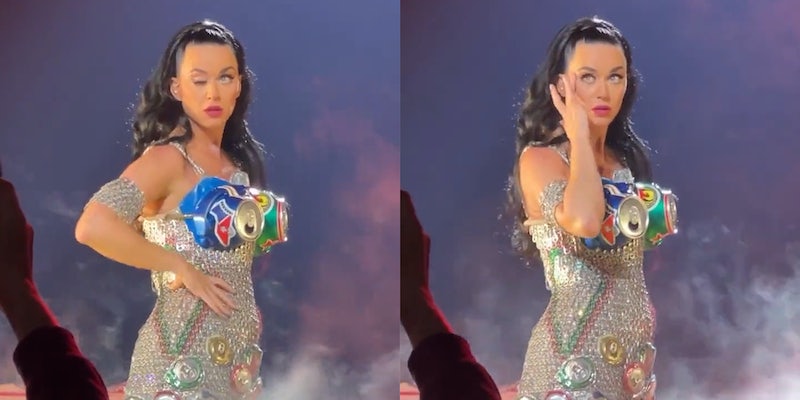 A video of the pop singer seemingly struggling to open her eye has set the internet ablaze.

Footage that appears to show pop singer Katy Perry struggling to open her right eye has led to an explosion of conspiracy theories online.

While performing a recent show as part of her Las Vegas residency, Perry could be seen repeatedly touching her temple in an apparent attempt to keep her eye from closing.

The video quickly spread across social media, with users speculating widely on the cause of the alleged eye issue.

Many, including the conservative media outlet the Blaze, attempted to link Perry’s eye problem to the COVID-19 vaccine.

“Katy Perry was talking about getting the vax and, look, she can’t open her eye!” host Chad Prather said. “That’s gotta be frightening, you can see the ‘WTF’ on her face…”

The term “Eye of the Pfizer” was also repeatedly used, a reference to the pharmaceutical giant and the 1982 hit “Eye of the Tiger” by rock band Survivor. It’s also a lyric used in one of Perry’s biggest hits, “Roar.”

“Katy Perry: Eye of the Pfizer,” one user said.

Others blamed everything from the glue used in fake eyelashes to Botox injections.

“People are freaking out over this Katy Perry clip. It’s not from the Vaccine,” another added. “It’s Botox. Botox often leads to droopy eye syndrome.”

Over on more conspiratorial corners of the internet, some even suggested that Perry may have been replaced by a clone or a robot and argued that the singer was clearly pushing a button on the side of her face. A user on former President Donald Trump’s social media platform Truth Social argued that the real Perry had been executed at Guantanamo Bay.

“Katie [sic] perry is axed by military tribunals. That’s not her!” the user wrote. “Clone. She sold herself to Satan, have you heard adrenochrome yep she’s one of them.”

No evidence exists whatsoever to prove any of the theories. The most likely explanation, however, has nothing to do with vaccines.

Although representatives for Perry did not respond to inquires from the Daily Dot, the singer has for years openly discussed what she describes as her “wonky eye.”

As recently as last year, a contestant on American Idol confided to Perry that he was self-conscience about his lazy eye. The singer responded by noting that she had “a wonk eye as well.”

“It’s my right eye,” she said. “So just celebrate all that stuff. Don’t worry about it.”

In fact, Perry acknowledged the eye issue long before the COVID-19 pandemic. In 2016, the pop star even made mention of her eye in response to a photo posted on Twitter.

Despite Perry admittedly having an eye issue for years, conspiracy theorists seem uninterested in attributing the problem to anything other than vaccines.

Perry is just one of countless high-profile individuals whose apparent medical issues have been linked to vaccinations without evidence.