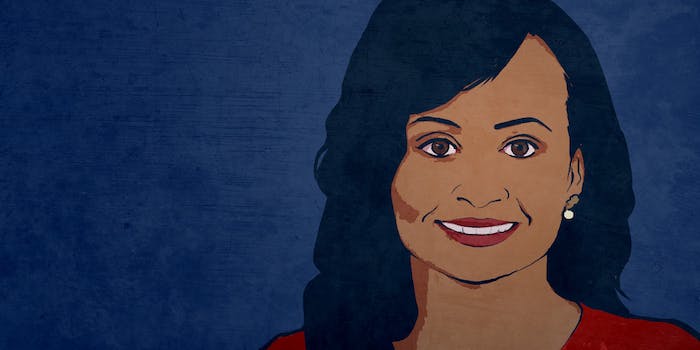 In 2004, Barack Obama was an Illinois state senator.

Donald Trump had a very bad Tuesday, as he kicked a baby out of his rally and lost the vote of New York Rep. Richard Hanna, who became the first Republican Congressman to say he would vote for Hillary Clinton instead.

His spokeswoman, Katrina Pierson, didn’t have it much better.

As she was interviewed by Wolf Blitzer on CNN’s The Situation Room on Tuesday, Pierson attempted to defend Trump and his feud with the parents of Army Capt. Humayun Khan, who was killed by a suicide bomber while serving in Iraq in 2004. The Gold Star parents, Khizr and Ghazala Khan, criticized Trump at the Democratic National Convention, and Trump has kept the feud alive for the past several days, outraging his Republican colleagues and Muslim women in general.

In her interview, Pierson said Trump didn’t need to apologize to Khan, and she said she was confused why Trump was being blamed for this ordeal because it was Clinton who had voted for the Iraq war and because it was the policies of President Barack Obama and Clinton that might have led to Khan’s death.

Pierson, of course, is right. Clinton did vote for the Iraq war, a vote she later said was a mistake. And though Trump has said during his campaign that he never supported the Iraq war, he also told Howard Stern in 2002 that he guessed he was in favor of it.

But that isn’t the biggest issue with Pierson’s interview. Pierson somehow blamed Obama for changing the rules of engagement four years before he actually became president. Obama was still an Illinois state senator at the time (though this isn’t the first time Obama has been blamed for something that occurred during George W. Bush’s presidency, such as the federal response to Hurricane Katrina).

Trump's spokesperson who today blamed Obama for the death of a solider four yrs before he was elected POTUS –> https://t.co/vB83NYTcoL

Obama is a time traveler & went back to 4 yrs before he was President & changed the rules. Awesome. @KatrinaPierson https://t.co/5u9jZCsH2Q

No one can deny: Katrina Pierson is the perfect spokeswoman for Donald Trump. A marriage made in heaven, or wherever.

Pierson has had a fast rise to one of the most visible positions in the Trump campaign. She voted for Obama in 2008 and worked for Ted Cruz during his Senate campaign in 2012. After impressing Trump during her time with the Texas senator, he hired her as spokesperson. But she’s had Twitter problems of her own, which began to resurface after Tuesday’s interview.

As Republican consultant Mike Murphy wrote in an email to Khalid, “[Pierson] is a vital and integral part of Donald Trump’s plan to lose the election and hand the White House over to Hillary Clinton. She is a message train wreck.”

As for Khizr Khan’s response to Pierson’s jumbled timeline?

Khizr Khan on CNN responding to Katrina Pierson's latest spin: "Do I even need to say anything."

Update 11:43am CT, Aug. 3: Pierson now says she was “absolutely” wrong to blame Obama and Clinton for Khan’s death. CNN’s John Berman said to Pierson on air on Wednesday, “You do acknowledge now that there you were just wrong.”

“Well, absolutely,” Pierson said. “That’s why I used ‘probably,’ because I was just going through the timeline.”