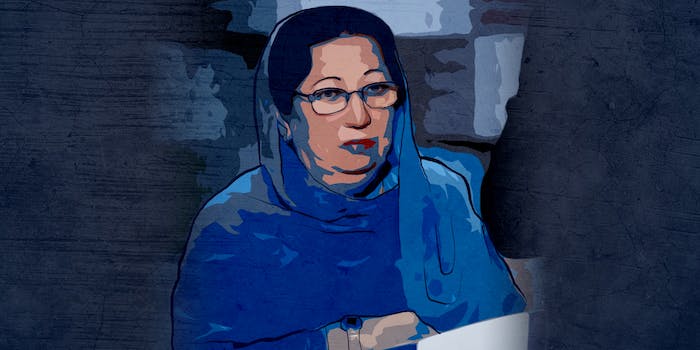 Muslim women speak out against Trump with #CanYouHearUsNow

Last week, Khizr Khan, father of an American Muslim killed in Iraq, delivered a powerful speech at the DNC. In it, he directly criticized Republican presidential nominee Donald Trump, who at one point suggested the U.S. ban Muslim immigration. Khan held up a copy of the U.S. Constitution and said, “In this document, look for the words ‘liberty’ and ‘equal protection of law.'”

Onstage, Khan was joined by his wife, Ghazala Khan, who stayed silent during his speech. In an interview with ABC, Trump questioned why that was. “If you look at his wife, she was standing there,” he said. “She had nothing to say. She probably, maybe she wasn’t allowed to anything to say. You tell me.”

Mrs. Khan later said she was too grief-stricken to speak. Many have criticized Trump for perpetuating harmful stereotypes about Muslim women with his questioning. In response, Muslim women are now speaking out.

The Muslim Public Affairs Council (MPAC) and other Muslim groups started the hashtag #CanYouHearUsNow today, to show the diversity and strength of Muslim women. “When I think of Muslim women, I think of all the beautiful women who are working hard every day to spread good and change the world for better,” said Fatima Salman, executive director of the Muslim Student Association National and Central Zone rep for ISNA, in a statement. “This campaign is designed to show Donald Trump and the rest of America this reality.”

Muslim women "not allowed to speak?" I gave a @TEDTalks and got a standing ovation. #CanYouHearUsNow https://t.co/iggExDBXzD

I was president of my nursing class, grad w/honors, & am a family nurse practitioner student…w/out anyone's permission. #CanYouHearUsNow

#CanYouHearUsNow I teach students 5 days/week, 2 semesters/year. Spoke at 3 conferences this summer. And I am a loud-speaking mother, 7/365!

Explaining why abusers shouldn't have access to guns – does that side eye look oppressed to you? #CanYouHearUsNow pic.twitter.com/y5Aobj7Ozu

Hey little D. This is Italy awarding my work on #globalsecurity.Thx for making it more challenging. #CanYouHearUsNow pic.twitter.com/PlgVSfOrzo

“When Trump bashed Ghazala Khan, many of us Muslim women activists were not only upset at his insensitive remarks toward a mother of a fallen hero, but also were thinking how he sure doesn’t know how outspoken Muslim women are!” Fatima Salman of MPAC told the Daily Dot over email. “The hashtag was a direct response to…’You think we don’t talk? Hear us now.'”

Salman said she hopes the campaign elicits a response from Trump or the GOP, but most of all that it shows everyone how damaging stereotypes can be. Muslim women, who come from all races and backgrounds, suffer from the misconception that they are controlled by their male relatives, and that it is their religion that requires this of them.

However, you can find examples of men using their belief systems to control women in nearly every religion (and plenty of nonreligious people can find justifications too). You can also find examples of religious and nonreligious women just living their damn lives without anyone’s permission. And yet Muslim women seem to have to disproportionately answer for it.

“And although a mean bigot like Trump probably won’t change, we hope that all his blind followers also see and realize that Muslim women are, in fact, not silent. That we are propagators of good and will speak truth to power,” says Salman. “We hope that this wakens the souls of the silent observers not speaking up against the decline of morals and civility in our country.”