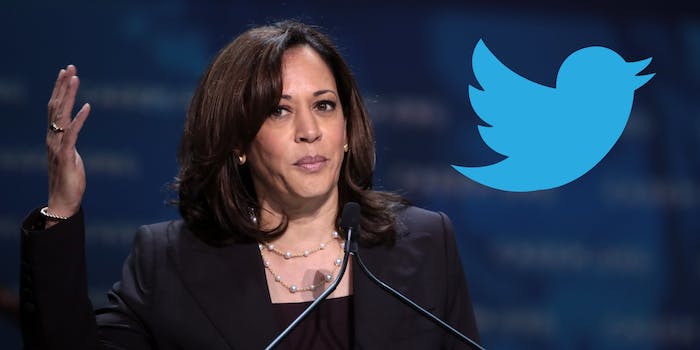 It turns out the claim, spread by conservative pundits, is entirely false.

A former press secretary for Sen. Kamala Harris (D-Calif.), who now works at Twitter, is being accused by conservatives of being the platform’s “top censor.”

In an article Wednesday from the National Review, writer David Harsanyi suggests that there is a clear conflict of interest now that Harris has been chosen as Democratic presidential nominee Joe Biden’s running mate.

Harsanyi argues that the Twitter employee, Nick Pacilio, “is now in charge of deciding what the president of the United States can and can’t say on Twitter to his 85 million followers.”

“Pacilio has already removed debatable contentions by the president—or, contentions no more misleading than any number of Joe Biden allegations,” Harsanyi writes. “The point of removing presidential tweets, of course, has nothing to do with worrying about information but rather about being able to call Trump a liar.”

So are the “damning” claims accurate?

Pacilio did in fact work for Harris. Between 2011 and 2013, Pacilio, according to his LinkedIn profile, worked as Harris’s deputy press secretary. Pacilio was later promoted to press secretary and held the role between 2013 and 2014.

Pacilio left not long after and began working at Twitter in late 2014. Even though Pacilio has been employed at Twitter for nearly six years, outlets such as the Daily Caller ran stories last week insinuating that Pacilio only recently joined the company.

But is Pacilio the platform’s “top censor?”

It turns out that isn’t true either. Despite conservative pundit Sean Davis sparking the false claim last week, Pacilio does not have the ability to “censor” anyone.

Pacilio’s official title at Twitter is Senior Communications Manager. The false claim originated earlier this month due to a tweet from Pacilio.

Given his role at the company, Pacilio let users know on Aug. 5 that a retweet from Trump had been removed for violating rules on COVID-19 misinformation.

The tweet, which originally came from the Trump campaign team’s account, included video of the president falsely claiming that children are “almost immune” to the virus.

Conservatives began making the false assumption soon after that Pacilio had somehow facilitated the action against the tweet when he was merely explaining the platform’s reasoning.

Brandon Borrman, the vice president of global communications at Twitter, also debunked the National Review article in a statement on Wednesday.

“This piece is completely factually inaccurate. He is a spokesperson and plays no role in enforcement decisions,” Borrman said, referencing Pacilio. “This article is wrong, full stop, and it’s deeply disappointing that @NRO never so much as called to fact check it knowing it would put my colleague in the spotlight.”

After considerate backlash, the article was adjusted to note that Pacilio only announced the decision regarding the Team Trump account instead of ordering it.

Harsanyi, the article’s author, eventually added a note to the bottom of the piece explaining the adjustment.

Harsanyi also admitted to the significant errors made in his article in a statement on Twitter.

“I corrected this post to note that Pacilio just announces Twitter deletions, he doesn’t have a role in deciding them,” He said. “I apologize for the error.”

The article’s headline was eventually changed to call Pacilio “the face of Twitter censorship” instead of “Twitter’s top censor.”

Despite the correction, Sean Davis, the conservative who first spread the false claim, doubled down by tweeting out an article from The Federalist making the same incorrect allegations.