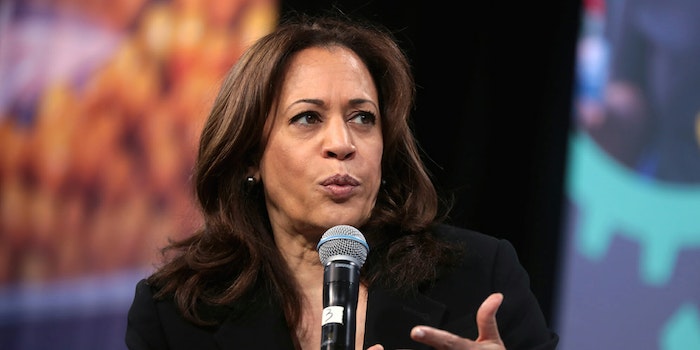 Sen. Kamala Harris (D-Calif.) tried to clarify her stance on health insurance on Friday, just hours after she appeared to support abolishing private insurance during the second round of the first 2020 Democratic debate.

On Thursday night, Harris and Sen. Bernie Sanders (I-Vt.) were the only candidates to raise their hands when asked whether they would “abolish” private health insurance and use a government-run program. This mirrored a similar situation on Wednesday night when only Sen. Elizabeth Warren (D-Mass.) and New York City Mayor Bill de Blasio raised their hands.

However, on Friday, Harris said she misinterpreted the question.

Speaking on Morning Joe on MSNBC, Harris was asked whether she believed “private insurance should be eliminated in this country.”

“No, no I do not,” Harris said, adding: “The question was: would you give up your private insurance for that option, and I said yes.”

“Oh, I think you heard it differently than others then,” the host responded.

“Probably, because that’s what I heard,” Harris said.

Sen. Kamala Harris clarifies her position on eliminating private insurance in the US, following her response at #DemDebate. pic.twitter.com/TQImTGKnWe

In a separate interview on CBS This Morning on Friday, Harris said she supported Medicare for All, and said she was answering whether she specifically would switch to a government-backed healthcare plan.

“I'm in support of Medicare for all. And under a Medicare for all policy, private insurance would certainly exist for supplemental coverage… we would actually extend benefits. For example, vision care, dental care, hearing AIDS, which currently are not covered” — @KamalaHarris pic.twitter.com/4oqiC9d3SV

“We asked a question about healthcare last night that spurred a lot of discussion, as you know. We’re going to do it again now. Many people watching at home have health insurance through their employer. Who here would abolish their private health insurance in favor of a government-run plan?”

The question was similar to what was asked on Wednesday night to the other candidates: “Who here would abolish their private health insurance in favor of a government-run plan?”

So in a very precise sense, yes, Holt asked the candidates about abolishing “their private health insurance,” but it seemed to be meant to illustrate support for government-backed health insurance replacing private insurance.

However, this isn’t the first time Harris has tried to clarify her beliefs on healthcare. In January, she seemed to say that she believed it was necessary to “eliminate all of that” when speaking about the “process of going through an insurance company,” during a CNN town hall, essentially arguing private insurance needed to be abolished.

However, aides walked it back the next day, telling the news outlet that she was talking about the bureaucracy surrounding healthcare and insurance.

In April she said that her plan “doesn’t get rid of supplemental insurance.”