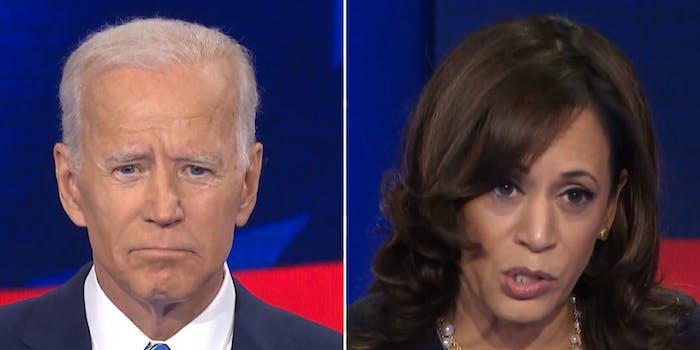 It was one of the more heated exchanges of the night.

Sen. Kamala Harris (D-Calif.) pressed former Vice President Joe Biden over the recent criticism he’s faced for speaking about his relationships with racists members of Congress in the past.

The conversation between Harris and Biden was one of the more heated moments of the second round of the first 2020 Democratic primary debate on Thursday night.

Harris prefaced her criticism of the former vice president by saying she did not “believe you are a racist,” but pushed back on his remarks earlier this month where he spoke about getting “things done” with former segregationist senators James Eastland and Herman Talmadge.

“I do not believe you are a racist,” Harris said. “I agree with you when you commit yourself to the importance of finding common ground. But I also believe–it’s personal and it was hurtful to hear you talk about the reputations of two United States senators who built their reputations and career on the segregation of race in this country. It was not only that, but you also worked with them to oppose busing. There was a little girl in California who was part of the second class to integrate her public schools, and she was bussed to school everyday. And that little girl was me.”

Biden responded, saying that he did not “praise racists” and that he “ran because of civil rights” when he got into politics.

The full exchange between Kamala Harris and Joe Biden on Biden’s history with racial issues. pic.twitter.com/sK950pFyvf

“There was a little girl in California who was bussed to school. That little girl was me. #DemDebate,” her account posted.

There was a little girl in California who was bussed to school. That little girl was me. #DemDebate pic.twitter.com/XKm2xP1MDH

The heated exchange made for quite the juxtaposition.

Biden, who has led the early polls of the Democratic primary field, has fielded a number of criticisms throughout the night, including from Rep. Eric Swalwell (D-Calif.).