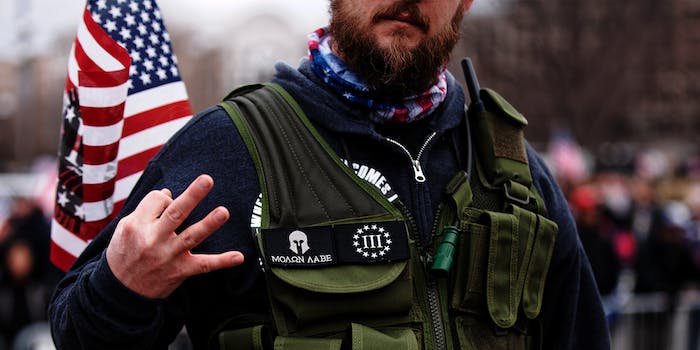 'I don’t know a single person in the MAGA movement who is going. It’s a setup.'

An upcoming conservative protest in Washington, D.C., is already being called a setup by conspiracy theorists convinced that the federal government is plotting a “false flag.”

The “Justice for J6” rally, set to be held in the nation’s capital on Saturday, is aimed at bringing awareness to the alleged mistreatment of those arrested for rioting at the Capitol on Jan. 6.

Yet despite the protest being spearheaded by Matt Braynard, who worked on former President Donald Trump’s campaign in 2016, conspiracy theorists believe that the event is actually designed to entrap so-called patriots.

Although reporting has attempted to portray the event as a potential sequel to Jan. 6, users on far-right message boards are urging one another to avoid D.C. entirely.

Longtime Trump confidant Roger Stone claimed in a recent interview on the Russian government-funded network RT that the federal government was hoping to elicit a repeat of Jan. 6.

“I don’t know a single person in the MAGA movement who is going. It’s a setup,” Stone said. “Here’s my suggestion. The people who will be there, will all be working for the government. Nice try.”

As noted by NBC News, others on sites such as 4chan and Facebook have echoed similar sentiments.

The Proud Boys, who were integral in breaching the Capitol on Jan. 6, have likewise stated on Telegram that they do not plan to attend over concerns that the protest is nothing more than a trap.

Yet Braynard has attempted to push back on the paranoia, arguing against those who view public protest as inherently suspicious.

“There are voices on the left and the right trying to discourage patriotic Americans from believing that the election system cannot be fixed, that voting doesn’t matter, and that public demonstrations like ours are ‘false flag attacks’ and are futile,” Braynard told NBC News.

Even though all available evidence suggests the protest will not be comparable to Jan. 6, law enforcement has been taking steps in order to fortify the area. The Metropolitan Police Department will have additional units deployed as well as temporary fencing around certain areas of D.C.