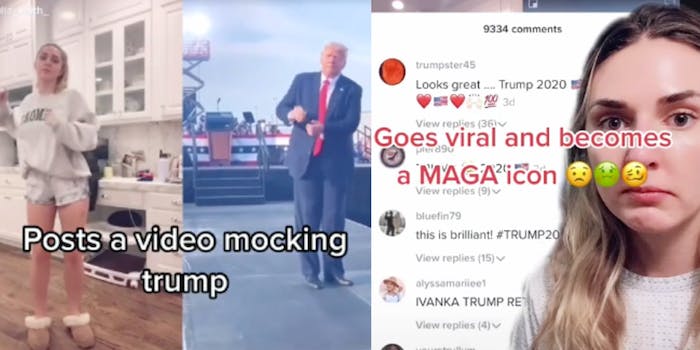 Ivanka Trump even praised the video.

A woman says that after she posted a video making fun of the way President Donald Trump dances, supporters of the president, including his daughter Ivanka Trump, misinterpreted it. Now, the TikToker is setting the record straight

Julia Keith, 26, was one of the TikTokers who spearheaded the trend of mimicking Trump’s dance moves after the president tried breaking it down at a Florida rally in early October. While Trump was dancing to the Village People’s “Y.M.C.A.,” Keith copied his dance moves to the sound of Savage’s “Let Me See Your Hips Swing.”

At the time, pro-Trump users flooded her comment section with praise, seemingly thinking she made the video in support of the president. “This is brilliant! #Trump2020,” one wrote, with others sharing similar “Trump 2020” sentiments.

They weren’t the only ones who failed to catch the satire. The video was eventually shared by Ivanka Trump on Twitter. “Love it!” she tweeted.

That is the moment, according to BuzzFeed News, Keith realized she needed to set the record straight. “I can’t even fathom that I would have a hand in this election, and that people see [my video] and thinking, ‘Oh he’s a great guy,'” she told the outlet. “How many people did I cause to vote? But also, who would vote based on a video?”

“This is not what I intended,” she wrote in a follow-up video. In that video, she recounted how she accidentally became a “MAGA icon” before attempting to clarify that she’s not even a Trump supporter. The video ends with a photo of Democratic presidential nominee Joe Biden.

Keith has since used her newfound viral platform to continue making fun of Trump’s dance moves and to educate prospective voters about the upcoming election.