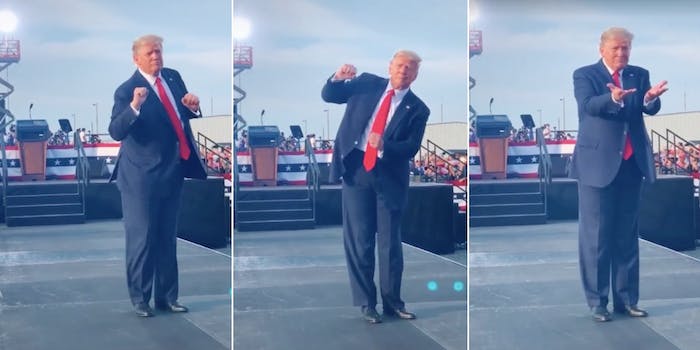 Remember when President Donald Trump tried dancing to the Village People’s “Y.M.C.A.” at last week’s Florida rally? You can’t unsee the president’s moves once they’ve burned themselves into your retinas, and neither could the TikTokers who remixed Trump’s dance into a crunk viral meme.

Trump’s moves have been set to several different tunes on TikTok, perhaps the most popular being a mashup of Savage’s 2005 club anthem “Swing” and Coldplay’s orchestral chart-topper “Viva La Vida.”

TikToker @crisnate0 shared a video of Trump careening onstage to the surprisingly fluid remix; in two days, it has been viewed over 9 million times.

After @crisnate0’s video exploded, other TikTokers wanted to get in on the fun. User @julia_keith_ earned over 4.6 million views on a split-screen video in which she mimics the president’s moves. She’s perfected the geriatric swaying and aggressive elbow drop.

The Trump x “Savage” x “Viva La Vida” mashup has enough fuel to dominate TikTok’s For Your Page for days, if not weeks, to come. Now which brave influencer will be the first to show the president slam-dancing to the Miss May I’s version of “Swing”?