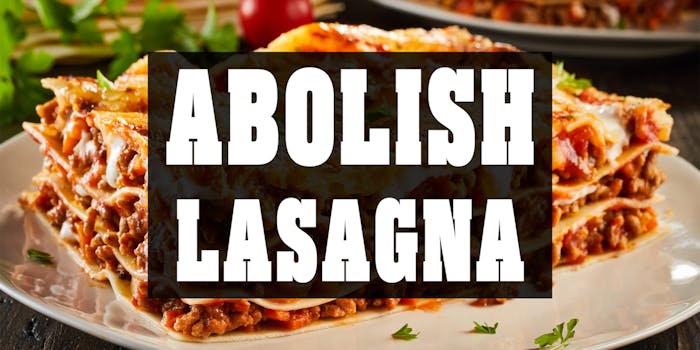 Republican hyperbole about Biden is so wild, people believe a GOP senator said he wanted to ‘abolish lasagna’

Ernst presented a sign of what she deemed “Liberal Fantasy Island” that was so bizarre people are falling for a photoshopped version of it.

The photoshopped version said “sex blimps,” “Marvelous Mrs. Maisel,” “only gay people get to go to restaurants,” and “abolish lasagna.”

The sign was so believable that “abolish lasagna” soon started trending. It probably helped that Republicans have lately made a meal out of falsely claiming that Biden planned to impose limits on meat consumption.

“Wait is this a real thing or a joke I cannot even tell anymore these days,” said @NalgeneGuy.

Most people figured it out, eventually. Some had to seek an assist from fact-checking site Snopes, which actually took the time to debunk it—that’s how many people believed it.

Many brought Garfield jokes, tagged themselves (most popular: Sex blimps), and suggested that some of the items could be band names.

Disappointing to some, Biden didn’t even mention lasagna in his speech.