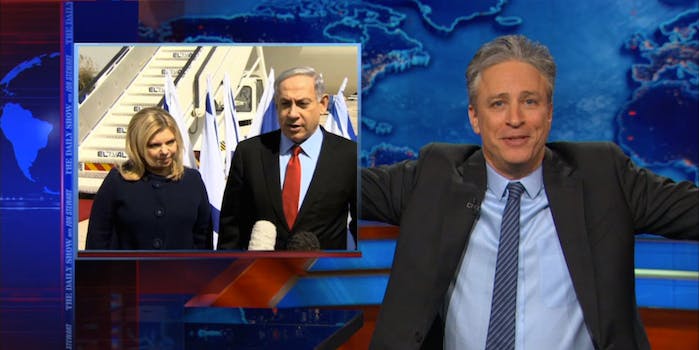 If one of these speeches happened every week, Stewart might not even want to retire.

Warning: This article contains a video that autoplays.

Israeli Prime Minister Benjamin Netanyahu gave a speech to Congress Tuesday, and people freaked out about it, to put it lightly.

The Jewish community, on behalf of which Netanyahu claimed to be speaking, was full of mixed opinions. Netanyahu himself had strong opinions, especially on the subject of Iran‘s nuclear program. And then there was Congress itself, where the cheers for the Israeli leader practically broke C-SPAN’s sound system. On Tuesday night’s Daily Show, Jon Stewart described the standing ovation as “by far the longest blow job a Jewish man has ever received.”

Given all of the political theater surrounding this speech—which was arranged by House Speaker John Boehner (R-Ohio) without the input of the White House—Stewart found plenty of comedic fodder for last night’s segment. CNN’s use of the Star of David as a transition graphic was just the icing on the political cake.