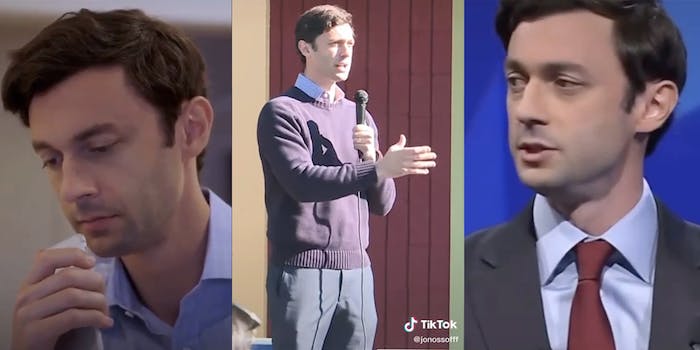 Jon Ossoff is popping off on TikTok

Is it interesting though?

One of the Democrats in the Georgia Senate runoff race is taking over political TikTok.

Jon Ossoff is up against Sen. David Purdue (R-Ga.) in the state’s runoff, as neither candidate achieved 50% of the vote in November. Like other Democrat officeholders, Ossoff uses TikTok to inspire young voters. And he already has 1.9 million likes on the app.

He roasts Purdue in one post for not agreeing to debate him, posting a video of an empty podium with Akon’s “Lonely” playing in the background.

Another video compiles Ossoff’s criticisms of Perdue captioned: “has anyone seen David Perdue?”

“If David Perdue doesn’t want to answer questions in public about his record and debate his opponent, that’s fine, he just shouldn’t run for re-election to the U.S. Senate,” Ossoff says in one of the clips.

And he hopped on popular TikTok trends like “you have to stop” and “extremely rare aesthetic.”

“You have to stop acting like the Senate isn’t at stake in these two Georgia runoff. The future of our country and the plant are at stake, COVID relief, health care, climate change,” Ossoff says.

Ossoff is not the first to use TikTok to his campaign’s advantage. In Massachusetts’ Democratic primaries, Sen. Ed Markey (D-Mass.) galvanized young voters online in what became the “Markeyverse,” an online community tweeting Markey-themed memes and TikToks.

One viral TikTok roasted his opponent, Joe Kennedy, for his wealth.

Much of the Markeyverse consisted of first-time voters. It’s likely Ossoff is trying to get the same youth momentum.

The Ossoff campaign did not respond to a request for comment.