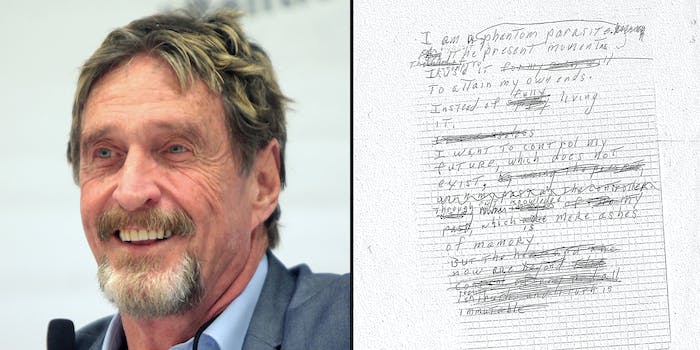 'I want to control my future, which does not exist.'

John was found dead last month in a Spanish prison cell, where he had spent the previous eight months, just one day after his extradition to the U.S. on tax evasion charges was approved.

Spanish officials have stated that John’s death was self-inflicted, while Janice has repeatedly argued that her husband was not suicidal.

“Here is the alleged suicide note found in John’s pocket,” Janice tweeted. “This note does not sound anything like someone who has no hope and is contemplating ending their life. This note sounds like one of John’s tweets. #NotASuicideNote #JusticeForJohnMcAfee.”

The note, numerous parts of which are scribbled out, has not officially been transcribed.

The missive appears to open with the statement “I am a phantom parasite.” Another section appears to state “I want to control my future, which does not exist.”

Prior to releasing the note, Janice accused Spanish officials of a “cover-up” after failing to receive “the death certificate, the official autopsy report, or the official report from the prison.”

“I understand that things take time but the lack of cooperation from the Spanish authorities only confirms our suspicions that they have something to hide,” she tweeted.

In a follow-up tweet on Saturday, Janice confirmed that she was able to see John’s body but complained that she could only see his “head through a window at the facility where they are keeping him.”

“His entire body from the neck down was covered with a sheet & blanket,” she tweeted.

The high-profile death has since led to widespread conspiracy theories, including the false claim that the U.S. government bombed a condominium in Florida in order to destroy damning documents held there by John.