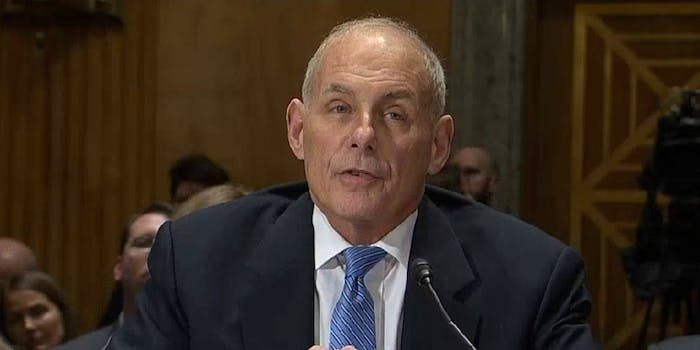 He does not look happy.

President Donald Trump made some pretty wild comments about North Korea on Tuesday, and White House Chief of Staff John Kelly apparently wasn’t a fan of his remarks.

Trump threatened to “totally destroy” North Korea and “Rocket Man” dictator Kim Jong-un if forced to defend the United States or its allies on Tuesday during a speech to the United Nations General Assembly. The speech touched on various points of Trump’s foreign policy agenda and was swiftly criticized by some as isolationist and potentially dangerous.

But Kelly was caught on camera making the face many Americans probably had when they heard Trump’s inflammatory remarks: a facepalm.

The speech, which also touched on Trump’s ideal of having an “America first” foreign policy, apparently didn’t sit well with many world leaders, as Yahoo News points out.

The remarks were just the latest in a seemingly endless series of outbursts and tweets Trump has made against North Korea, incl ing: bringing down “fire and fury” on the secluded nation, being “locked and loaded” against any threat from its government, and mentioning that “all options” were “on the table” for the United States regarding the country and its nuclear program.