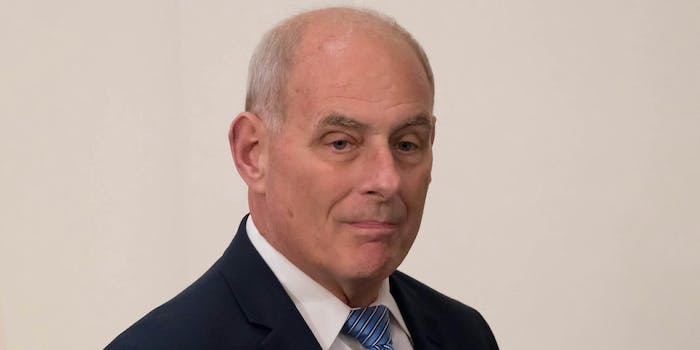 John Kelly is leaving the position after months of internal conflict in the administration.

President Donald Trump announced that John Kelly, his second chief of staff in less than two years, will be leaving his post at the end of December.

Trump made the announcement to a group of reporters outside the White House on Saturday.

“John Kelly will be leaving…I don’t know if I can say ‘retiring,’” he said, according to a video shared by ABC News. “We’ll be announcing who will be taking John’s place, it might on an interim basis.”

The development doesn’t come as a shock for many as Kelly reportedly has had conflicts with the administration for months. He was brought in after Trump fired Reince Priebus to maintain some order in the otherwise chaotic setting of the administration, but had a “tumultuous” 17 months, according to USA Today.

For an administration that has had numerous members shuffle in and out, Kelly’s departure may not seem shocking. But Twitter responded exactly as expected:

I am already mad at all the John Kelly was good pieces.

Kelly has not yet released a statement regarding his departure from the White House.

The departure comes just days after reports of Kelly’s questioning by Special Counsel Robert S. Mueller III as part of his probe into whether Trump obstructed justice in the Russia investigation.

Brought on as one of the “adults in the room” of the chaotic Trump presidency, Kelly failed to rein in his boss, who is now attempting to ban transgender people from serving in the military, still detaining children at the southern U.S. border, insisting on sending thousands of troops to “protect” that border, and tweeting conspiracy theories.

Meanwhile, Kelly had several missteps himself during his tenure. He called Confederate General Robert E. Lee an “honorable” man and defended former White House staffer Rob Porter against allegations of domestic violence, among other mishaps.

President Trump is set to name Kelly’s replacement on Monday.