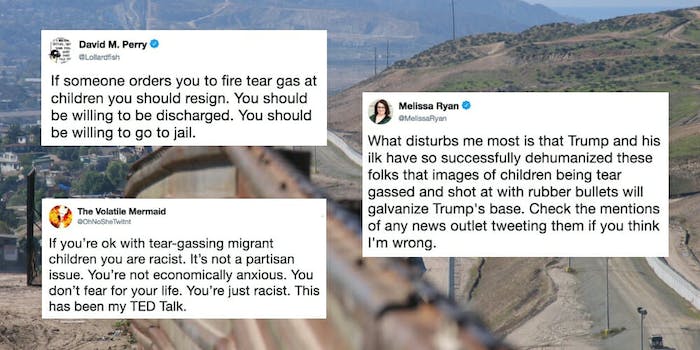 Mothers and children are seen crying over the confrontation.

On Sunday, the United States temporarily shut down the San Ysidro border crossing, a Port of Entry between Tijuana, Mexico, and San Diego, California, after hundreds of Central American migrants were bombarded with tear gas and, according to multiple reports, rubber bullets, fired by U.S. border authorities, according to BuzzFeed News.

The incident lasted nearly two hours, with two groups of migrants tear gassed after they crossed the Tijuana River, eventually returning to a stadium where they’ve camped for days, waiting for the opportunity to apply for asylum.

The groups had initially marched to the border wall from the stadium, Estadio Caliente, in protest and hope they would be permitted to enter, holding signs of U.S.-Mexico-Honduran flags, and others that read, “Donald Trump, Christ loves you,” the publication reported. Conditions at the stadium are cold, with not enough food and water to go around.

At least one person crossed the U.S. border and was apprehended by border authority, though a Mexican government official said at least 30 people crossed into the U.S. and were detained. Mexico, following the confrontation, said it plans to deport up to 500 people who attempted to cross the U.S.-Mexico border. It’s unclear if U.S. troops had any involvement in the confrontation, though a spokesman for a group that oversees the troops stated that troops aren’t conducting “any law enforcement functions.”

Online, Americans caught a glimpse of the scene from reporters and photographers on the ground. One woman is seen running with her children, grasping the wrists of one child in each hand, at least one dressed in a diaper as they escape the tear gas.

Other photos and video show migrants huddling and protecting their faces after the tear gas firings.

My source Jeff Valenzuela who was on the scene during the mayhem at the border with the caravan sent me this photo from when tear gas canisters went off @KPBSnews pic.twitter.com/gBjYbem7S9

On the scene with tear gas at border courtesy of Jeff Valenzuela @KPBSnews pic.twitter.com/HW2rGhf9Li

But the most poignant of these photos and stories were those of the children and mothers, some crying in response to the confrontation. One woman told San Diego public media journalist Jean Guerrero that she plans on going back to Honduras with her children because she doesn’t want to risk her sons’ lives.

Days before, Guerrero reported that mothers in the caravan she had spoken to had told her that the feared “certain unruly men,” such as those who had previously protested at the U.S.-Mexico border fence to be allowed into the country, of hurting their chances of entering by creating a “bad reputation” for the entire group.

This woman told me she plans to go back to Honduras with her boys after today’s frightening clash at the border w/ tear gas. She says she never thought entering the US would be like that, so hard & dangerous, and doesn’t want to risk her sons’ lives. @KPBSnews @NPR pic.twitter.com/ttXQI22kHM

Across Twitter views reacted to the news and images, expressing horror and shame at the officials who used tear gas and potentially other forms of physical retaliation at the people crossing the border.

Because gassing women and children desperate for a better life is hilarious. https://t.co/kGSvgc2dAV

If you’re ok with tear-gassing migrant children you are racist. It’s not a partisan issue. You’re not economically anxious. You don’t fear for your life. You’re just racist. This has been my TED Talk.

This isn't who we are America
This is wrong https://t.co/Id5kAiTdQn

What disturbs me most is that Trump and his ilk have so successfully dehumanized these folks that images of children being tear gassed and shot at with rubber bullets will galvanize Trump's base. Check the mentions of any news outlet tweeting them if you think I'm wrong.

This atrocity should be tried in The Hague.
Americans, fight this #HumanRights abuse.
The only thing these people, these children, threaten is white power. Their blood is on our hands if we don't stand up for them.
Donate to @ACLU & @RAICESTEXAS & write to your representatives. https://t.co/Ud2jHnc0eh

The San Ysidro Port of Entry was reopened in the hours following the confrontation, while migrants are left to wait at the stadium shelter for another day.