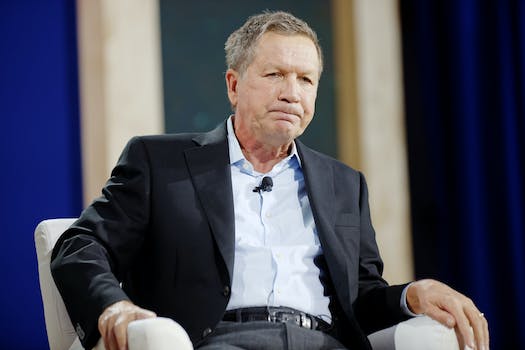 The Internet picked an unlikely winner of Tuesday’s GOP debate

Everybody's tweeting, but not about Trump

On Tuesday, a dozen Republican presidential hopefuls gathered in Milwaukee where an unexpected figure emerged as the focal point of online conversation.

Of the candidates seeking the 2016 GOP presidential nomination, outsider frontrunners Donald Trump and Ben Carson have dominated both public opinion polls and media coverage. However, as data provided to the Daily Dot by social media analytics and management firm Spredfast reveals, it was Ohio Gov. John Kasich who attracted the most attention on Twitter.

In total, the debate was the subject was the subject of over 930,000 tweets, approximately 107,000 of which were about Kasich, according to Spredfast. Texas Sen. Ted Cruz was in a distant second place with 55,000 and Kentucky Sen. Rand Paul came in third with 50,000.

The single most tweeted about moment of that night was when Kasich, who is attempting to positioning himself as the race’s moderate, challenged Trump’s proposal to deport some 11 million undocumented immigrants living in the United States. During the spike surrounding this moment, Kasich was the subject of over 3,500 tweets per minute, Spredfast’s data shows.

Kasich on deporting 11 million people, "it's not an adult conversation."

Not all of the conversations surrounding Kasich were positive. His second biggest spike of the night came when he defended the necessity of bank bailouts.

During the previous Republican debate, Cruz attracted the most social media attention by attacking not only the moderators, but the media in general. This time, his biggest Twitter moment came when he ran down the list federal agencies his would eliminate and named the Department of Commerce twice.

While Kasich attracted the most notice on Twitter, other online metrics showed different candidates generating more interest. Carson, for example, saw the most Google searches for his name—despite the fact that he had the least speaking time of any candidate on the stage.

On Yik Yak—the anonymous, location-based social network popular with high school and college students— Trump captured slightly over one-third of all mentions, the highest of any candidate. 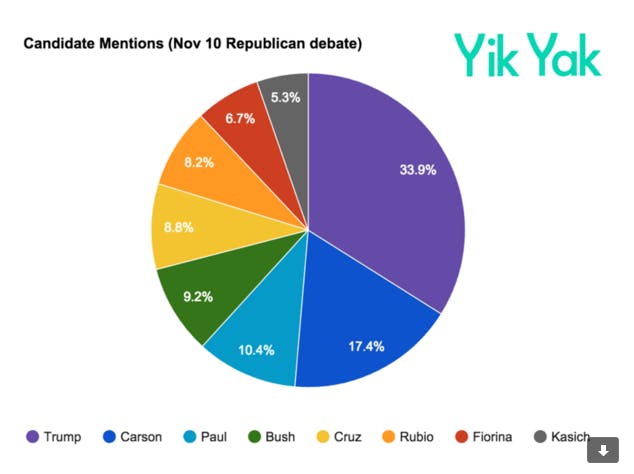 However, when those Yik Yak messages were broken down by sentiment, whether users were praising or criticizing a candidate, a very different picture emerges. Paul may have only netted 10.4 percent of all Yik Yak mentions, but 50.7 percent were positive. Rubio, whose overall share of the total was even smaller than Paul’s, was just a hair below him in terms of positive sentiment.

In contrast, Trump had the lowest positive sentiment of any candidate. 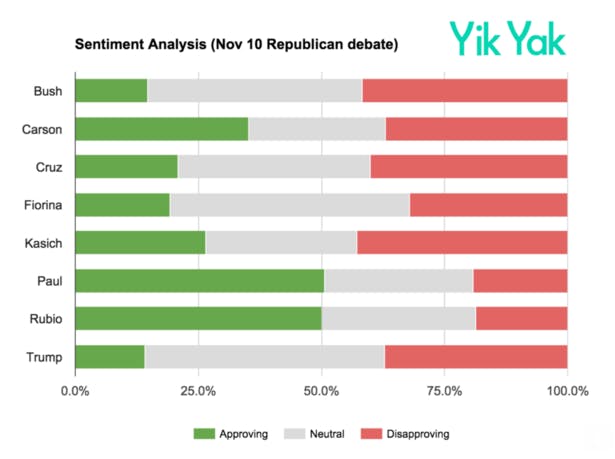