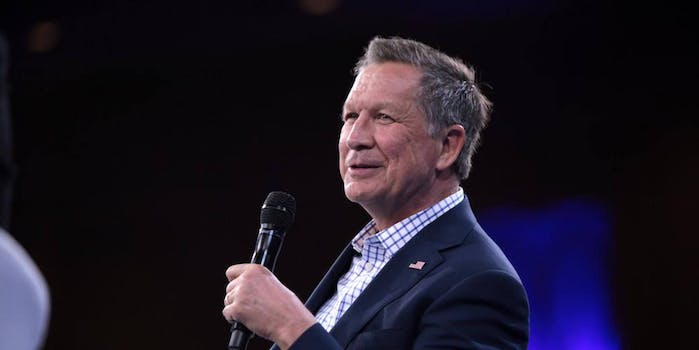 Kasich made good on his promise to trump Trump.

Ohio Gov. John Kasich won his home state’s primary on Tuesday night, his first of the 2016 election, putting a significant speed bump in Donald Trump’s path to the White House.

“To have people believe in you, and to believe that you can bring people together and strengthen our country—I have to thank the great people of the state of Ohio,” Kasich told a cheering crowd following his victory. “I love ya.”

In a thinly veiled jab at Trump, Kasich promised to never take the “low road” to the “highest office in the land.”

Kasich led the Republican presidential pack with 43.3 percent of the vote to Trump’s 34.4 percent. In recent state polls, Kasich had a 3- to 6-point lead over Trump in the state.

Kasich will receive all 66 of Ohio’s Republican delegates. Of the 1,237 delegates needed to secure the Republican nomination, Trump has secured 568. Kasich is currently in last place, with 129 delegates.

Earlier in the evening, Trump won the Florida primary, securing the state’s 99 delegates. Sen. Marco Rubio (R-Fla.) suspended his campaign after his home-state loss to Trump.

The battle in Ohio centered around the state’s economic conditions and, in particular, international trade agreements that Trump directly blamed the former governor of Ohio for.

Kasich repeatedly guaranteed he’d win in Ohio and kickstart his winless campaign. After all the talk, anything but a first place victory may have been a fatal blow.