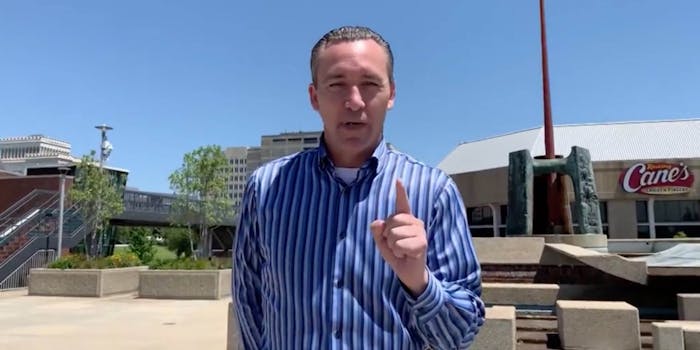 'If you don't have a church, give through my website,' says the pastor who recently held an Easter Sunday service with hundreds in attendance.

An evangelical pastor out of Louisiana is urging his followers to donate their entire stimulus checks to churches.

Tony Spell, pastor of the Life Tabernacle Church, made the request in a video posted to YouTube on Wednesday.

Dubbing his call the #PastorSpellStimulusChallenge, the religious leader pushed his viewers to hand over their checks this Sunday to evangelists, missionaries, and music ministers “who haven’t had an offering in a month.”

Spell goes on to assert that he, his wife, and his son all plan to donate their checks and that fellow christians should do the same.

“If you don’t have a church, give through my website,” the pastor says.

The initiative has not been well received. Spell’s YouTube video currently has nearly 10,000 downvotes and just 93 upvotes. Commenters on the video have argued that their stimulus checks would be better suited for groceries and other necessities.

“How about you DONATE your Stimulus Check to the FOOD BANK to HELP FEED those who need FOOD!” user Vickey Vicknair wrote.

Others noted the fact that Spell recently held an Easter Sunday service with hundreds in attendance despite social distancing recommendations.

“How about you donating your personal wealth to all the people you have sickened by not following federal guidelines on distancing?” user Paul Aussendorf said.

Spell isn’t the only prominent Christian leader who has pushed back on attempts to clamp down on the pandemic.