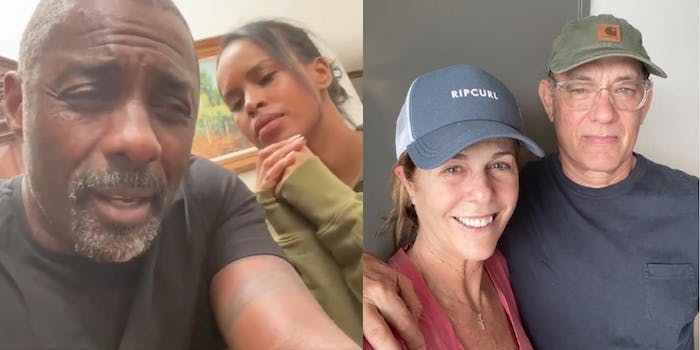 All the celebrities testing positive are leading many to believe there's preferential treatment at play.

Ever since coronavirus infections were discovered in the U.S., the public has been angry and outraged over the lack of available test kits.

But some are pointing out that celebrities are somehow immune to the shortage, as they seem to be having easy access to COVID-19 tests.

Since the disease’s outbreak, actor Tom Hanks, along with his wife and actress Rita Wilson, actor Idris Elba, basketball star Kevin Durant, and Canadian Prime Minister Justin Trudeau’s wife Sophie Trudeau are just some of the big names who have tested positive for the virus.

And as the list of celebs who are confirmed to have the coronavirus grows, so is the anger over what appears to be unequal access to tests. Many believe celebrities are getting preferential treatment over others who may be in a more dire need of testing–especially after reports say Elba and Durant were tested despite having no symptoms.

“I’m 62 with lung cancer with flu like symptoms last week, I couldn’t get tested,” Twitter user @logical4ever said in response to news that Elba has “no symptoms so far.”

There have been reports that whole basketball teams are being tested for the coronavirus. After Utah Jazz center Rudy Gobert was confirmed to have the coronavirus, the rest of the team, along with those affiliated with the team, were tested. All in all, 58 tests were carried out for the team, which took up the majority of Oklahoma’s testing resources for the day.

Durant, along with three other Brooklyn Nets players tested positive the coronavirus on Tuesday. Yet, only one is exhibiting symptoms. The team was reportedly tested through a private company.

Many in the public are not getting tested if they are not exhibiting symptoms. In fact, people are being urged by officials to stay home and only seek out medical care if they are experiencing extreme symptoms.

“Commoner: i have all the symptoms for coronavirus can i get tested. Doctor: sorry we don’t have enough tests. Any celebrity: i don’t have any symptoms but i looked at someone who has the virus. Doctor: NURSE, GET A TEST STAT! to celeb you’re not dying on my watch,” Twitter user @andlikelaura wrote.

Kris Jenner was also just recently tested for the disease after she may have come in contact with someone who had it while at a party. She was exhibiting no symptoms. Celine Dion was also tested for the coronavirus, but she just had a cold.

Another user pointed out that it’s likely not a coincidence there has been an uptick in celebrities being confirmed to have the coronavirus.

“Now that Kevin Durant, Idris Elba, and Tom Hanks have tested positive for COVID19, I’m going to go out on a limb and say that celebrities aren’t more prone to getting it,” Twitter user @FredTJosephThe wrote. “The rest of us just aren’t worthy of being tested in America.”

With that being said, it’s not a bad thing celebrities are getting tested. Testing should be happening, but it should be happening for all Americans in mass and equally. South Korea is practicing mass testing and has a very low death rate.