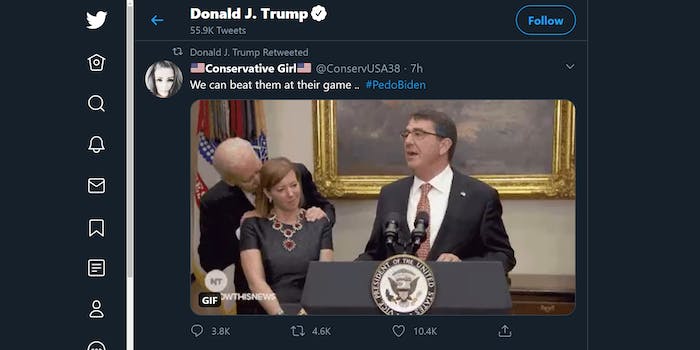 It's a dangerous precedent.

President Donald Trump retweeted a post from a supporter accusing former Vice President Joe Biden of being a pedophile.

It’s a lot, for a lot of reasons. Foremost, it’s the president of the United States calling his opponent a pedophile (using a GIF of what appears to … not be a child, so… whatever). But that’s a damning accusation that comes without evidence.

Biden has had his own documented issues with women, but there have never been any accusations of untoward behavior with underage women. Trump, who constantly accuses his opponents of his behavior he is guilty of, has been accused of walking through the dressing rooms and bragging about seeing teenage girls naked.

The tweet is throwing red meat to Trump’s most ardent fan base, QAnon supporters, who are convinced the Democratic Party is filled with Satanic pedophiles.

The president’s own son has made a nod to it on Instagram, and now Trump is leaning into it

By publicly offering a retweet to a claim like that, Trump is undoubtedly signaling to a base of his that supports violent insurrection against any election result that doesn’t end with Trump winning. It’s setting the stage to say if Trump loses, rise up, because the person who beat him is a child molester, unfit for office.

It’s a dangerous and frightening precedent that the president is setting with one push of a button on his phone.

The Trump campaign did not respond to a question about this tweet.