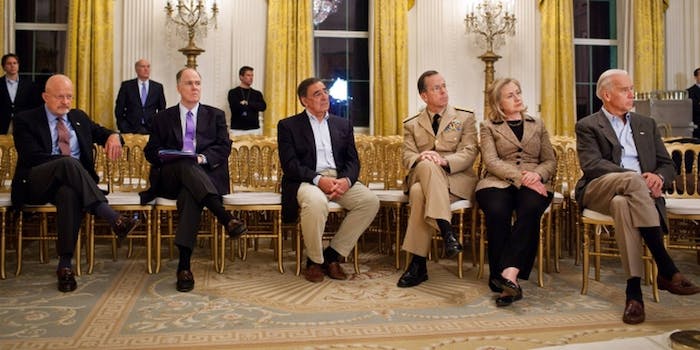 'In my view, God willing, it'll be Secretary Clinton.'

Thursday was quite a day for Hillary Clinton. She received an endorsement from the president. She got another one from Massachusetts Sen. Elizabeth Warren. She got a fantastically lukewarm hashtag on Twitter, and she had a terrific social-media clapback on Donald Trump.

And late in the day, she got yet another high-profile endorsement, as Vice President Joe Biden, who once thought about running for president himself, gave Clinton his blessing.

As Politico notes, it wasn’t necessarily a full-fledged endorsement. Instead, Biden, speaking at the American Constitution Society convention Thursday night, referenced the need to fill the vacancy on the Supreme Court and said, “Whoever the next president is, and in my view, God willing, it’ll be Secretary Clinton.”

Though Biden—who, earlier in the day, penned a heartfelt letter to the Stanford sexual assault survivor—last month told ABC “I think I would have been the best president,” he never declared his candidacy. Soon after his son, Beau, died, Biden decided against running, saying his window to realistically try for the presidency had closed.

Earlier Thursday, Barack Obama released a video that endorsed Clinton and called her the most qualified person ever to run for president.

Even Bernie Sanders said he would work with Clinton against presumptive Republican nominee Donald Trump.

“Donald Trump would clearly, to my mind and I think the majority of Americans, be a disaster as president of the United States,” Sanders said after meeting with Obama at the White House. “It is unbelievable to me, and I say this with all sincerity, that the Republican Party would have a candidate for president, who in the year 2016 makes bigotry and discrimination the cornerstone of his campaign.”