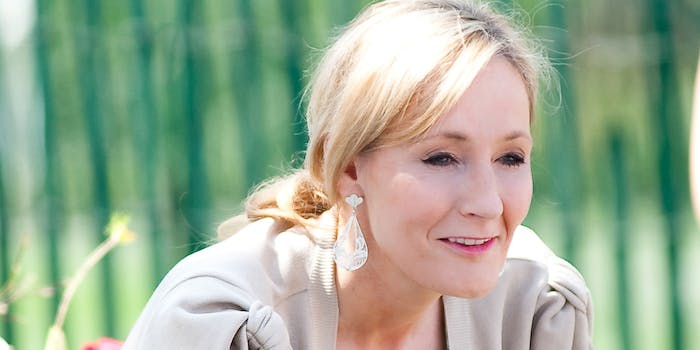 The author has strong words for people who want to ban Trump from visiting the United Kingdom.

Famed author J.K. Rowling doesn’t like what Donald Trump says, but she’ll defend his right to say it.

In her speech at the PEN America gala on Monday night, the Harry Potter author addressed a recent petition asking the U.K. government to bar the presumptive Republican presidential nominee from entering the country.

The parliamentary petition, launched in December, requested that the British government deny Trump entry into the country due to his remarks about Muslims. While the petition remains open, the government has already rejected it, saying it will not bar Trump from visiting the country despite his “divisive” comments.

The petition, which remains active until June 8, has more than 585,000 signatures.

Rowling has butted heads with Trump in the past. In December, the author tweeted that comparing Trump to Voldemort, the main antagonist in the Harry Potter series, was unfair—to Voldemort.

How horrible. Voldemort was nowhere near as bad. https://t.co/hFO0XmOpPH

In defending Trump on Monday night, Rowling said that limiting his right to travel based on what he said would only weaken everyone else’s freedoms.

“If my offended feelings can justify a travel ban on Donald Trump, I have no moral grounds upon which to argue that those offended by feminism, or the fight for transgender rights, or universal suffrage, should not oppress campaigners for those causes,” Rowling said. “If you seek the removal of freedom from an opponent simply because they have offended you, you have crossed the line to stand alongside tyrants who imprison, torture, and kill with exactly the same justification.”