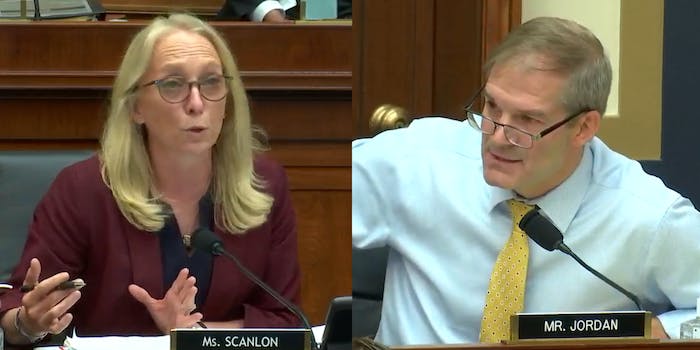 Rep. Jim Jordan (R-Ohio) went ballistic during a congressional hearing on Wednesday after having his remarks regarding tech companies labeled as “fringe conspiracy theories.”

While addressing Google CEO Sundar Pichai in front of the House Judiciary subcommittee on antitrust, Jordan demanded that the tech leader vow not to tip the upcoming 2020 presidential election in favor of former Vice President Joe Biden.

“Can you assure Americans today you wont tailor your features to help Joe Biden in the upcoming election?” Jordan asked.

Pichai responded by disputing Jordan’s allegation that Google is working in favor of Biden over President Donald Trump before committing to continue its neutral approach to the presidential race.

After spending nearly all of his allotted five minutes of questioning on the topic, Jordan eventually relented.

“Thank you, gentlemen,” Scanlon began. “I’d like to redirect your attention to antitrust law rather than fringe conspiracy theories.”

The remark led to a shouting match between Jordan and other members of the subcommittee, with one lawmaker eventually shouting “put your mask on.” Rep. David Cicilline (D-RI), the subcommittee chairman, also had to start banging his gavel to have Jordan stop shouting.

After Jordan’s outburst, Scanlon was eventually able to continue her questioning.