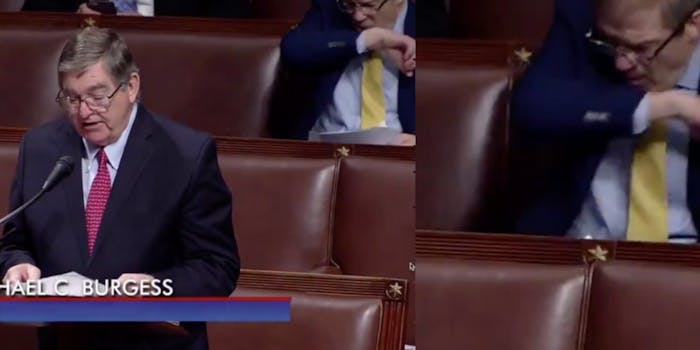 Other congresspeople have been following the reccomendations.

People are expressing frustration with Rep. Jim Jordan (R-Ohio), who appeared on video on Wednesday repeatedly coughing and not wearing a mask.

Jordan was testifying at the House Rules Committee on Wednesday, where he denounced a recent plan for oversight on coronavirus as a means to undermine President Donald Trump’s leadership, Cleveland.com reported on Thursday.

“This is just one more attempt by the Democrats to go after the president,” he reportedly said at the testimony.

Rep. Jamie Raskin (D-Md.) chided Jordan for not wearing a mask at the testimony, and said it’s “obviously not a sign of bravery.”

“It’s a sign of irresponsibility towards other people because when we wear a mask, we’re protecting them,” he said. “When they don’t wear a mask, they’re not protecting us.”

Some cracked wise about Jordan’s lack of a coverup and his, well, being accused of helping cover up a sex abuse scandal at Ohio State when he was a wrestling coach.

Others echoed Raskin’s thought that not only is his lack of a mask putting him at risk, it is putting those around him at risk as well: