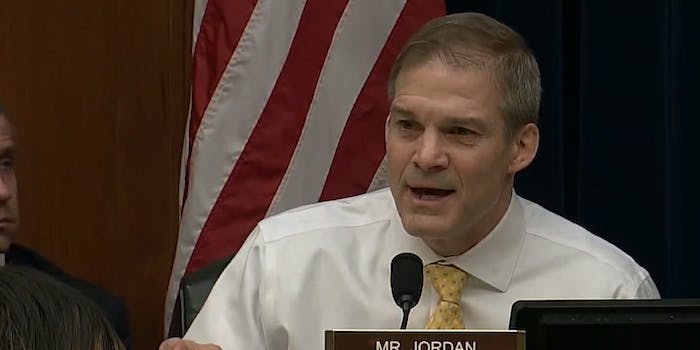 Jordan has his own issues.

Jordan also looped the Clinton’s into the whole thing, accusing the couple of orchestrating the hearing as a hit on the president.

But Jordan’s wild pontificating about morality, crimes, coverups, and truthfulness was undercut by the fact that Jordan currently stands accused of willfully ignoring a sexual abuse scandal while he was a wrestling coach at Ohio State.

Numerous former student-athletes said that Jordan was aware that Dr. Richard Strauss, an Ohio State employee, was sexually abusing athletes. Students at the school have said that Jordan knew what was going on and actively discouraged students from reporting it.

That hypocrisy was not missed by people watching the hearing.

Hey @Jim_Jordan, wouldn’t you love it if you’d be remembered for this hearing rather than for looking the other way while one of the coaches on your wrestling committee molested over 100 boys?

IF ONLY Jim Jordan was as outraged at the sexual abuse of wrestling students on his watch as he is at COHEN for revealing the corruption of Donald Trump. #Shame https://t.co/1Uuln2gCdh

Rep. Jim Jordan (R) is wrestling with the conduct of this Cohen hearing. pic.twitter.com/0YSlnEuL6b

Now Jim Jordan knows how it feels to voice concern only to be ignored by those above you.

For someone who was aware of his athletes being sexually abused and chose to do nothing, Jim Jordan seems real offended to have a felon in the room.