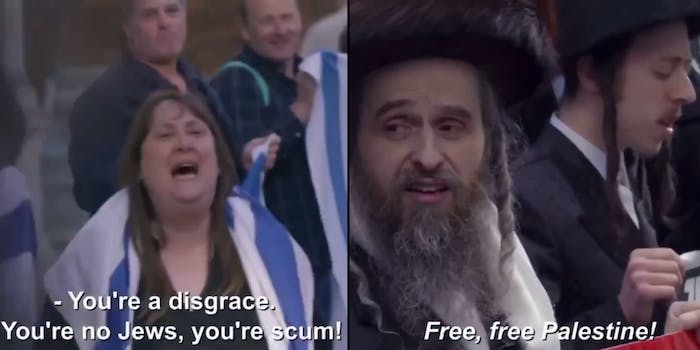 Tensions escalated in London among Zionists and Jews in support of Palestine in a new video posted to Reddit Sunday, as Zionists dressed in white and blue wrapped themselves with the Israeli flag shouting profanities at Orthodox Jews across the street.

“You’re a disgrace. You’re no Jews, you’re scum!” one protester yelled, wearing the Israel flag on her back.

Meanwhile, across the street, Orthodox Jews, dressed in traditional garb, stood in solidarity with Palestinians, holding Palestinian flags and chanting.

“Traitors! Israel!” the Zionist protesters yelled from one side of the street.

The 40-second video, posted to the r/PublicFreakout subreddit, then cuts back across the street as viewers get a glimpse of the signs the Jews for Palestine are holding. It’s generated 695 comments since being posted.

“State of ‘Israel’ DO NOT Represent WORLD JEWRY,” one sign read, held up by a young woman and older man wearing a shtreimel, a fur hat traditionally worn by Hasidic Jewish men.

London police can be seen in the foreground of the video talking to protesters on both sides as they try to de-escalate the situation.

“We have our Jewish brothers! Judaism is OK. Zionism is no way. Free, free Palestine!” one man yelled into a microphone.

“Israel you have no right to Palestine!” another man yelled, cupping his hands around his mouth to carry his voice over the other protesters.

Zionists are Jews who believe the state of Israel is the Jewish homeland and its protection is crucial to Judaism as a whole. Opposing protesters in the video were Orthodox Jews and Palestinians, among other supporters of Palestine, looking to condemn Israel’s violence against Palestinians and advocate for freedom in Palestine.

Users on Reddit were fascinated by the video. Some discussed how divided the Jewish faith is concerning relations between Israel and Palestine as violence continues to dominate world news.

“I will never understand that kind of animosity and hostility. That blows my fucking mind and rips my heart out,” one user wrote.

Others saw the Orthodox Jews standing in support of Palestine as heroic in their stance against Israel.

While the video highlights a brief interaction among the two sides, many Reddit users felt it illustrated the ability to differentiate between religious ties and justice in a clear division among Jews.