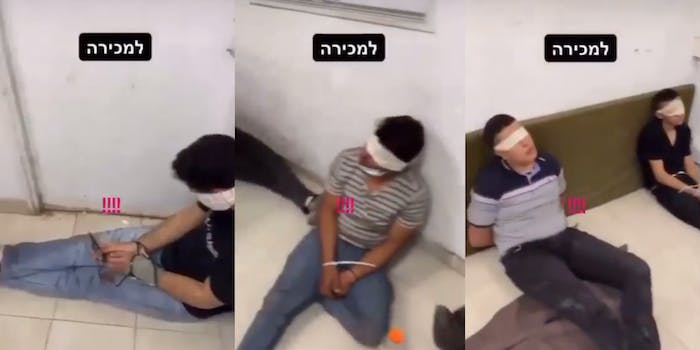 An alleged Israeli soldier is accused of uploading video to Instagram this week that shows a group of Palestinian males being mocked while bound and blindfolded.

Hiba Yazbek, a Palestinian journalist based in New York City, shared the footage to Twitter on Tuesday and alleged that the detained individuals were children.

“This is an #Israeli soldier’s Instagram story,” Yazbek wrote. “These are detained Palestinian children.”

Yazbek says that a caption on the video reads “for sale” in Hebrew. The alleged soldier, Yazbek continues, can be heard shouting “2 for 100, 3 for 75” while panning his camera across the room.

It remains unclear when and where the video was filmed. The alleged soldier who originally uploaded the footage to Instagram has since made their profile private.

The video stirred widespread outrage across social media and appeared to further fuel an already tense situation in the Middle East.

The footage comes after weeks of clashes between Israeli police and Palestinian protesters in Jerusalem’s Old City, home to holy sites revered by Christians, Jews, and Muslims.

Other issues, including restrictions on Palestinian gatherings during Ramadan and plans to evict numerous Palestinians from an East Jerusalem neighborhood, made the situation more volatile.

Tensions eventually boiled over this week, resulting in an exchange of rocket fire and airstrikes between militants in Palestine and the Israeli military.

So far, 28 Palestinians have reportedly been killed as a result of Israeli airstrikes. The Israeli military claims that 16 of those killed were militants. Rocket attacks by Hamas have reportedly led to the death of three Israeli woman in the cities of Ashkelon and Tel Aviv.