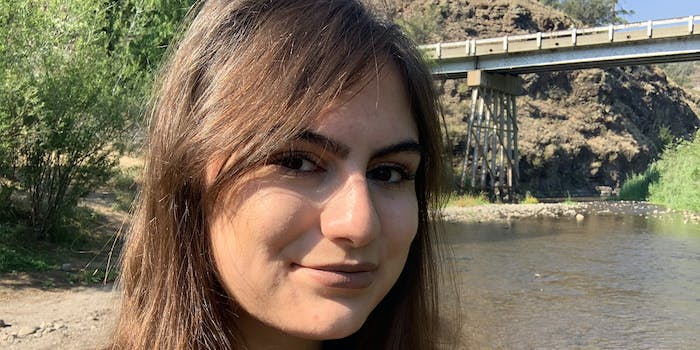 Anna Rajagopal planned to spend this summer getting work experience at Avodah, a Jewish nonprofit that promotes social justice. Shortly after Rajagopal started the job, a right-wing group targeted the 21-year-old rising college senior with claims of being a “Jew hater” and “one of the largest purveyors of antisemitism on social media”—particularly loaded accusations as Rajagopal is Jewish.

The group smearing Rajagopal is the right-wing Stop Antisemitism, which holds itself out to be one of the leading voices exposing antisemitism. Really, it singles out Jewish people like Rajagopal who criticize Israel’s treatment of Palestinian people.

“Stop Antisemitism is one of an array of far-right dark money astroturfed organizations whose mission is to demonize people, particularly Muslims and Jews, as antisemites for their support of Palestinian human rights,” cartoonist Eli Valley told the Daily Dot Thursday afternoon.

Valley, who’s previously been targeted for his views, added, “Everything else they do is window dressing for the primary goal of getting activists fired from their jobs, silenced and removed from the conversation about Israel/Palestine.”

Rajagopal told the Daily Dot that they warned Avodah about the possibility of bad-faith attacks when the organization posted the announcement about hiring them, as she’s previously been targeted by online factions over her views.

“I said to them, ‘There are going to be right-wing Zionist trolls who come out of the woodwork,'” Rajagopal told the Daily Dot over the phone on Thursday.

That’s exactly what happened. On Saturday, Stop Antisemitism published an article labeling Rajagopal its “Antisemite of the Week.”

The hit piece unleashed an avalanche of abuse, Rajagopal said. “I’m receiving hundreds of comments, direct messages, replies, and it’s just horrific,” they said. One person claimed to have confronted Rajagopal in person, which they say never happened but nevertheless finds terrifying.

“That scared me,” Rajagopal said.

Stop Antisemitism’s article included some of Rajagopal’s tweets that are sharply critical of people who support Zionism, which technically refers to the movement for Jewish statehood and self-determination in Israel, but colloquially has evolved to refer to unequivocal support for the Israeli government, including all of its actions against the Palestinians. This issue divides some in the Jewish community—with many more liberal Jews now questioning Israel’s treatment and displacement of Palestinians while conservatives label Palestinian resistance “terrorism” and fully support Israel’s actions towards them, up to and including violence.

In May, which Rajagopal said is after they interviewed but before they started at Avodah, they tweeted, “Death to colonialism means the end of Zionism. It means a free Palestine. It means Land Back. It means the destruction of statehood, walls and borders. It means the end of apartheid, police and any other tools of the colonizer.”

Rajagopal characterizes such tweets as supportive of Palestinians and critical of Israeli policy, not of their Jewish faith and the Jewish people.

“I stand by everything I said in relation to anti-Zionist,” Rajagopal said.

Rajagopal said that being lumped in with people like the Buffalo mass shooter, who was Stop Antisemitism’s “Antisemite of the Week” earlier this month, has been a nightmare.

“They’re grouping young BIPOC Jews in with literal Nazis who would kill us,” Rajagopal said. (BIPOC is an acronym for Black, indigenous, and people of color.)

Stop Antisemitism concluded its article with a call-out for people to email Avodah’s executive director, Cheryl Cook, and demand Rajagopal be fired.

This had the intended effect. Rajagopal said that Cook fired them over the phone on Monday.

Stop Antisemitism didn’t respond to an emailed request for comment on Thursday afternoon.

Avodah denied that the smear campaign had anything to do with its decision to fire Rajagopal.

“This is the result of the targeted racist harassment campaign,” they said.

“They’re trying to send me a message: we’ll get you fired no matter where you go … they disproportionately target BIPOC and young Jews of color,” Rajagopal added, referring to Stop Antisemitism.

Rajagopal said that many have referred disparagingly to their South Asian heritage and her family’s conversion to Judaism in childhood, which the article referenced. The article, they said, also incorrectly stated that their parents’ religions as Hindu and Christian (both are also Jewish).

Avodah insists it condemns the attacks on Rajagopal.

“We are also angry and disgusted to witness that this individual has been subjected to vile racism, misogyny, and even questioning of their Judaism,” it said.

“We condemn this behavior in the strongest terms. And we continue to report every single act of this bigoted trolling. We do not support the demonizing or disparaging of anyone, particularly Jews of color who experience this type of hate and questioning on a regular basis.”

Each email says, “After looking more closely into statements made by Anna, we decided their comments were not aligned with Avodah’s mission. Anna was hired in a part-time summer role, but we don’t believe their publicly-shared values align with ours, and we are parting ways.”

“Really?” Rajagopal said of Avodah’s denial that the article led to their firing. “You’re giving them more information about my unemployment than you are me.”

Rajagopal says that Cook’s emails stirred up another round of abuse.

Stop Antisemitism posted victoriously about the college student losing their summer job. Others piled on.

Not only did people viciously troll them online, they contacted their parents, Rajagopal said. Rajagopal sent the Daily Dot screenshots of one such email falsely claiming to her parents that they’re on OnlyFans and attempting to “prostitute herself to the highest bidder.”

Valley, who is also Jewish and was labeled Stop Antisemitism’s “Antisemite of the Week” in 2019, is alarmed by the group’s increasing influence.

“When they came at me they were commonly considered a fringe, far-right unknown maybe one-person-operated ridiculous clown organization but since then unfortunately several Jewish outlets have described them as if they are a legitimate organization and that has given them more sway in the conversation to continue smearing activists,” he said.

Rajagopal isn’t backing down. They’re consulting with legal counsel about potential next steps.

“I’m not going down without a fight…. I’m not letting this ruin my entire future. This is character assassination and I’m not going to let it happen.”

They’re also somewhat bewildered by the extent of the vitriol being directed at a 21-year-old college student with fewer than 20,000 followers across Twitter and Instagram. How can they possibly be, as Stop Antisemitism claims, “one of the largest purveyors of antisemitism on social media”?