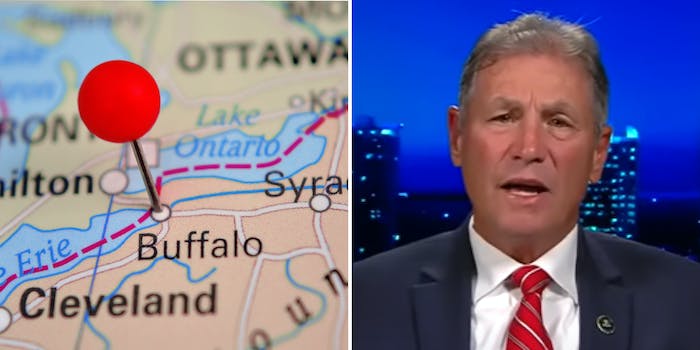 On Saturday, May 14, a shooter opened fire at a grocery store in Buffalo, New York, and killed 10. The alleged shooter is 18-year-old Payton Gendron of Conklin, New York, who is now charged with first-degree murder. He has pleaded not guilty.

As news continues to trickle out about the shooting and its causes, many are searching through a manifesto allegedly posted by the shooter to Google Drive before the attack.

The manifesto itself is 180 pages composed partially of racist and antisemitic memes, the shooter’s thoughts on cryptocurrency and environmentalism, photos and descriptions of his extensive weapon collection, his specific plan for Saturday’s attack, and more.

However, a sizable portion of the manifesto focuses on the far-right “Great Replacement Theory”—a conspiracy theory popularized by French writer Renaud Camus that states that white Europeans are being “replaced,” both demographically and culturally, by non-whites.

As evidence of this, the manifesto uses similar talking points to other peddlers of this theory. For example, the writer references the declining birth rates of white people in majority-white countries alongside increased immigration to the US. This is a common talking point amongst believers in the theory.

Like other believers in this theory, the writer of the manifesto also claims that white culture is being replaced. Data for a so-called “cultural replacement,” however, is scant; in this case, the writer uses loose definitions of what they consider to be “white culture” contrasted with their perception of cultures from non-white backgrounds.

While explicit endorsement of the Great Replacement Theory is rare in modern politics, ideas like the ones found in this manifesto have made their way into mainstream political discourse, particularly on the American right.

In a Fox News interview, Rep. Matt Gaetz (R-Fla.) stated that “there is an attempted cultural genocide going on in America right now,” referring to the removal of Confederate statues.

On several occasions, Fox News host Tucker Carlson has warned viewers that mass immigration is causing a seismic change in the country, while at the same time distancing himself from the idea that his fear was racially motivated.

“…​​The government shows preference to people who have shown absolute contempt for our customs, our laws, our system itself, and they are being treated better than American citizens,” Carlson stated in April of 2021, referencing a story from the previous segment. “Now, I know that the left and all the little gatekeepers on Twitter become literally hysterical if you use the term ‘replacement,’ if you suggest that the Democratic Party is trying to replace the current electorate, the voters now casting ballots, with new people, more obedient voters from the Third World. But they become hysterical because that’s what’s happening… Let’s just say it: that’s true.”

Discussions about immigration on the American Right are frequently made in the same apocalyptic terms used by believers in the Great Replacement Theory. For example, an increase in immigration is often deemed an “invasion,” a word used by Fox News hosts Stuart Varney and Pete Hegseth and former Gov. Mike Huckabee (R-Ark.), among many others.

In almost all cases, these talking heads do not elaborate on what the implications of this “invasion” would be beyond a simple demographic shift and a change in the American voter base. The Great Replacement Theory does elaborate, using similar rhetoric as a building block to compose the rest of its non-white exclusionary ideology.

There are numerous issues with the Great Replacement Theory. Let’s unpack them.

First, there is little consensus about the “white culture” that is theoretically being replaced.

The manifesto lists “hard work ethics, religion based on Christianity, values in justice and law, emphasis on science and the scientific method, and need for the truth” as some of the tenets of white culture. These points are vague, applying to scores of people of color while excluding many white people.

For example, 30% of white people in the United States do not identify as Christian, according to Pew Research. A 2005 report from the ROSE Project notes that students across countries and cultural backgrounds believe that “science and technology are important for society.” Data refuting the idea that the listed values are solely achievable in a white society is abundant.

Getting further into the details of the manifesto and the Great Replacement Theory, the reasoning gets even shakier.

Declining birth rates among white populations is a frequent talking point. However, using the United States as an example, a decline in birth rates has been seen across most races. According to a 2012 post by the Economic Policy Institute citing a report by Pew Social and Demographic Trends, birth rates for self-identified white, Black, Hispanic, and Asian people are all in decline.

A similar drop was seen in a 2020 report by the CDC, with experts theorizing that the change had more to do with the rising average age of American mothers than any cultural shift brought about by immigration.

Next, there is little data to suggest that immigrant populations and their children, non-white or otherwise, fail to integrate once they arrive in America—and plenty to suggest the opposite.

In 2015, The National Academies of Sciences, Engineering, and Medicine published a report that noted that not only do “neighborhoods with greater concentrations of immigrants have much lower rates of crime and violence than comparable nonimmigrant neighborhoods,” but over time, people with immigrant backgrounds tend to achieve comparable outcomes to their non-immigrant counterparts.

At its core, there is also a fundamental misunderstanding of the idea of “replacement” throughout the Great Replacement Theory. A rise in immigration, and a supposedly high immigrant and non-white birth rate, would not lead to the “replacement” of white people, and the data proves it.

The manifesto lists the Great Replacement Theory, with all its inconsistencies, contradictory statements, and outright falsehoods as the primary motivating factor for Saturday’s shooting.

At the time of publication, 10 people have died at the hands of the Buffalo shooter, with two additional people injured. Locals are currently holding vigils for those impacted by the shooting, with people arriving from all around the state and beyond to show their support for those affected.