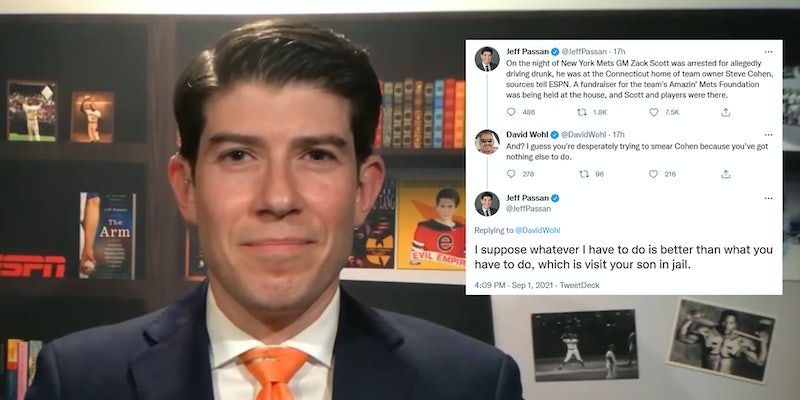 ‘I feel like I just witnessed a murder’: ESPN reporter’s take down of Jacob Wohl’s dad goes viral

‘One of the most unexpected and most ruthless Twitter burns I think I've ever seen.'

Jeff Passan, a baseball reporter for ESPN, has a pretty storied history of shutting down trolls who pop up in his Twitter mentions. But people online are buzzing about his latest victim: David Wohl, the father of notorious right-wing troll Jacob Wohl.

None of this is all that interesting—it’s simply Passan reporting on a baseball-related story that just happens to be the latest chapter of the Mets having a dark cloud consistently hanging over the franchise.

But when David Wohl popped in to comment on Passan’s tweet, things quickly escalated—and people were here for it.

Wohl responded to Passan’s tweet about Scott attending Cohen’s fundraiser. To Wohl, that detail was simply an attempt to “smear” Cohen, who bought the Mets last year and is the richest owner in baseball.

“And? I guess you’re desperately trying to smear Cohen because you’ve got nothing else to do,” Wohl tweeted.

Passan was quick to respond, and brought up Wohl’s son, Jacob, who the Federal Communications Commission (FCC) recently announced is facing a $5 million fine for more than 1,000 robocalls he and Jack Burkman allegedly made in the lead up to the 2020 election.

The robocalls were allegedly aimed at suppressing Black turnout in swing states like Michigan. Wohl and Burkman were charged for the calls in several states.

“I suppose whatever I have to do is better than what you have to do, which is visit your son in jail,” Passan responded to Wohl.

“Speaking without hyperbole, Jeff Passan just executed one of the most unexpected and most ruthless Twitter burns I think I’ve ever seen lmao,” Pete Blackburn, a reporter for Bally Sports, tweeted.

“OH MY GOD JEFF PASSAN FROM THE TOP ROPE. I feel like I just witnessed a murder,” another Twitter user chimed in with.

“If you are gonna come for Jeff Passan just know that this man doesn’t miss,” one user tweeted.

They weren’t the only ones to weigh in.

Wohl did respond to Passan on Wednesday, claiming that the ESPN reporter “specializes” in fake news and that his son is not in jail.