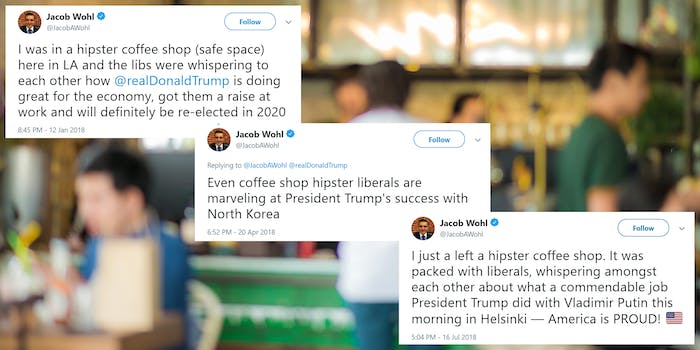 When President Donald Trump was running for election and lagging in the polls, there was great speculation over the silent Trump voter, the person who was afraid to voice support for Trump out loud because of the backlash to his candidacy, but who would cast their ballot for him. Jacob Wohl, a prominent conservative online troll, thinks he’s found them.

Wohl, a 20-year-old “financier” (and code of ethical conduct plagiarist), said this week he found people in public talking about Trump in, of all places, a hipster coffee shop.

(Which is ironic, you probably know, because hipsters are liberals and liberals supposedly dislike Donald Trump.)

Well, shit. That performance was almost universally panned by conservatives and Democrats so that seems unlikely, but who am I to doubt, Jacob Wohl, given that it seems like he’s being honest about this chance occurrence.

It’s clearly not something that happens to Wohl with specious regularity.

Wow, twice in three months. Pretty interesting. What about in, like, April?

Damn, they’re talking about Russia, North Korea and, what else? The economy?

According to Wohl, when reached for comment, the coffee shop in question was Verve, in downtown Los Angeles. Wohl reiterated his claim that this has happened to him repeatedly.

“I go to coffee shops and overhear conversations that are pro-Trump in nature between people who are prototypical LA hipster liberals,” he said over Twitter.

However, to a lot of people online, the likelihood of these occurrences all being real feels pretty low. Once Wohl’s frequent phrasing was spotted this week, it became an online punchline.

I just left a hipster coffee shop, it was packed with liberals, whispering amongst each other about how they like and RT all my tweets and think everyone who calls my feed "a hot sewer pipe of putrescent offal" is a Russian agent

The most likely explanation of these tweets is that the guy is making it all up.

But I prefer to believe that there is a hipster coffee shop in his neighborhood where the customers hilariously conspire to con him into thinking they're Trump supporters every time he walks in. pic.twitter.com/MqhdHBIFwN

Why would you even make up a lie about hearing shit in a hipster coffee shop? Just say YOU think Trump did a good job (then, maybe even support the statement!)

Why would hipster opinion EVEN MATTER? IUnless you're asking their opinion on avocado toast.

I was in a hipster coffee shop…. pic.twitter.com/NEE7bSUe8S

I was at a hipster coffee shop (safe space) today and everyone was saying how gratefully they are that Betsy DeVos is making it impossible to prosecute predatory lenders because they love their student loan debt.

This article has been updated to include Wohl’s comments.