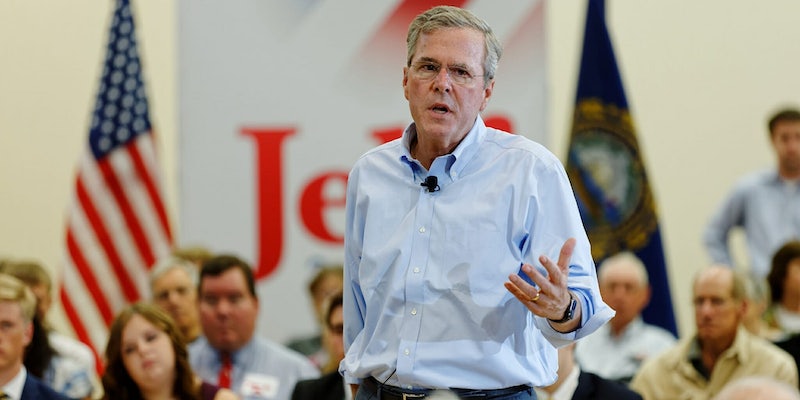 Bush claims that the new rules will stifle investment.

Jeb Bush pledged Tuesday to get rid of the FCC‘s net neutrality rules if he were elected president.

“Rather than enhancing consumer welfare, these rules prohibit one group of companies (ISPs) from charging another group of companies (content companies) the full cost for using their services,” Bush wrote in a policy paper called “The Regulatory Crisis in Washington.”

The Federal Communications Commission reclassified broadband Internet as a “telecommunications service” in late February, allowing the commission to apply rules preventing Internet service providers from blocking, slowing down, or prioritizing content for business purposes. Telecom industry groups and ISPs are challenging those rules in a federal appeals court, arguing that the FCC exceeded the scope of its authority under Title II of the Communications Act.

In his policy paper, which also slammed President Barack Obama‘s new consumer-protection agency and various occupational-licensing rules, Bush pointed to the handful of local Internet service providers that have criticized the FCC’s rules and warned that net neutrality would stifle investment.

FCC Chairman Tom Wheeler has rejected the notion that net neutrality will have a chilling effect on broadband industry spending. At a conference on Monday hosted by NTCA—The Rural Broadband Association, Wheeler criticized net neutrality opponents for their doomsday predictions about investment.

“While some parties turned into Chicken Little and spoke of the end of investment in broadband if we chose the Title II path,” Wheeler said, “others, including NTCA, described reality—that a modernized Title II made sense, and would not harm broadband investment.”

Bush, the former Florida governor who is running for the 2016 Republican nomination, previously criticized net neutrality by calling it “one of the craziest ideas I’ve ever heard.”