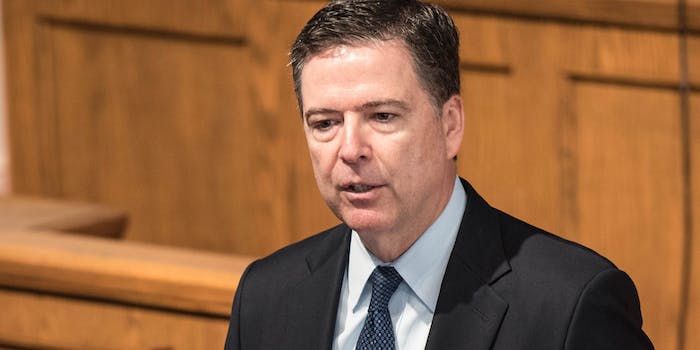 'I see evidence of great carelessness, but...'

FBI Director James Comey testified before members of Congress on Thursday, defending his decision to not criminally prosecute Hillary Clinton for mishandling classified material by using a personal email set-up during her tenure as secretary of state.

The hearing, held by the House Committee on Oversight and Government Reform, was at times confrontational and accusatory, which was predictable given the enormous specter of the ongoing 2016 presidential campaign hanging over the proceedings.

“There are two things that matter when a person commits a crime [with classified material],” Comey explained. “What did that person do, and what were they thinking?”

During the hearing, Comey argued the legal standard of criminal intent ultimately led to no charges being filed against Clinton, the presumptive Democratic nominee, by the FBI.

“We have no basis to conclude she lied to the FBI.”

“I see evidence of great carelessness,” he said. “But I do not see evidence that is sufficient to establish that Secretary Clinton or those with whom she was corresponding both talked about classified information on email and knew when they were doing it, that it was against the law.”

Comey cited a 1917 law that might have allowed for an indictment in cases of “gross negligence” but that has only been used a single time in the last century in a case involving espionage.

“No reasonable prosecutor would bring the second case in 100 years focused on gross negligence,” Comey said.

Chaffetz: Did Hillary Clinton break the law?
Comey: She did not.https://t.co/ixbo4KdXyehttps://t.co/0XzvmbMeoj

“We have no basis to conclude she lied to the FBI,” Comey said, answering further questions. Committee Chairman Jason Chaffetz (R-Utah) will request the FBI to determine if Clinton lied under oath, potentially extending the Bureau’s investigations into Clinton’s emails.

Much of the hearing was focused on comparisons to other cases including former Secretary of State Colin Powell, who also used a private email account during his time at the State Department, as well as former CIA Director David Petraeus, who shared classified information with his mistress, and Pfc. Chelsea Manning, who leaked a giant trove of classified material to WikiLeaks and is currently serving out a 35-year prison term.

Comey pointed out that, in each other case where the FBI did commence with criminal prosecution, the other individuals knew they were breaking the law and did so willingly.

“[Petraeus’] conduct illustrates the categories of behavior that mark prosecutions actually brought,” Comey said, referring to Petraeus admitting numerous times that he knew he was breaking the law with classified material. Patraeus also lied to the FBI about his actions, a crime in and of itself.

Much was also made of the fact that the Chaffetz lists his personal email on his business card rather than his government email address.

“Nobody says that’s wrong,” said Eleanor Holmes Norton, the Democratic delegate from the District of Columbia. “I don’t know if it’s wrong or right. There’s no guidance.”