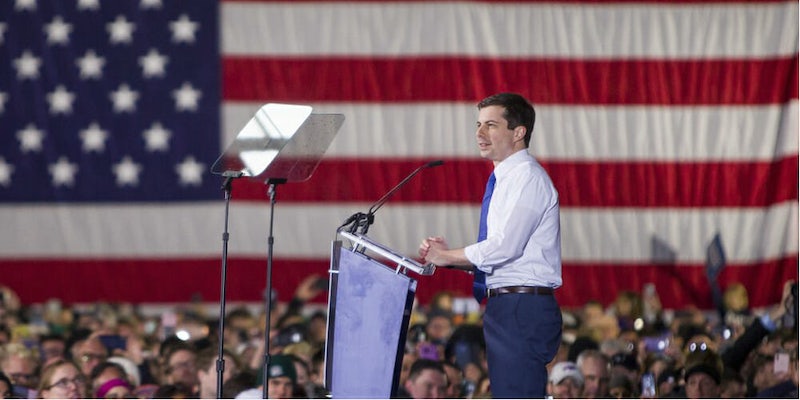 At the time, Buttigieg denied the claims.

“I’m sure it’s not the first time somebody is going to make something up about me,” he told the press. “It’s not going to throw us. Politics can be ugly sometimes but you have to face that when you’re in presidential politics.”

In a Facebook post published late Monday, however, after fringe conservative media and conspiracy websites attempted to push the narrative, the real Kelly issued a statement to formally deny that he had been sexually assaulted by Buttigieg.

Kelly then said that he did not own the “fake twitter @realHunterKelly” and that he’d had no part in the creation of the Medium article that made the bogus allegations.

Explaining how he suspects the situation arose, and without getting into detail, Kelly wrote how he had been approached by a political figure about being invited to talk about “political situations from the standpoint of a gay Republican” in Washington, D.C. At the meeting the unnamed individual, Kelly says, specifically discussed Buttigieg and a campaign they were working on against him.

Skepticism had been raised around the allegations in the hours after they were published by several right-wing social media personalities who have been associated with pushing dubious reporting and fake news. One user who was quick to the story was David Wohl, father of pro-Trump troll Jacob Wohl—who previously manufactured a deceptive sexual smear campaign against Robert Mueller.

Examining the source of the allegations on Monday, the Daily Dot had noted differences between Kelly’s real social media accounts and the account now known to be a fake. The fake accounts tried to rebrand Kelly as a supporter of left-wing presidential candidate Bernie Sanders, when Kelly is a Trump supporting Republican.

At the same time, the Daily Beast reported that an anonymous Republican Party source had told their journalist that lobbyist Jack Burkman and Jacob Wohl had approached him last week to convince him to smear Buttigieg with a sexual accusation.

The Daily Beast acquired audio of the meeting, in which Wohl says Buttigieg is a “terminal threat” to President Donald Trump’s reelection and that fabricated sexual allegations would “kneecap” Buttigieg’s presidential race.

Burkman and Wohl have both tried before to fraudulently weaponize the Me Too movement against left-wing lawmakers or those they perceive to be political opponents to Trump. On almost every occasion, however, these subversive campaigns have been thwarted by the duo’s poor execution.

Burkman and Wohl have not commented on Kelly’s story, but the Advocate published Instagram screenshots of Kelly talking to Wohl, revealing the duo to be behind the false story.

Wohl and Burkman picked up him from the airport Monday around 12:30 a.m. after his flight at Baltimore/Washington International Thurgood Marshall Airport and then drove to Burkman’s home. During the ride and at the house, Kelly says the two men discussed how they must stop [Buttigieg’s] campaign for president.

Kelly woke up on Monday around 11 a.m. to find that they had used his name and likeness to launch the campaign, and told him that he was the “star and hero” for being central to their plot. However, the student maintains that he didn’t agree with this.

Once again, the two have proven themselves to be the country’s most inept political operatives, willing to make unwitting conservatives fodder for their lying schemes to maliciously score political points.

Importantly, many conservatives online refused to run with the Buttigieg smear narrative being promoted by the hyperpartisan, useful idiots at far-right media and conspiracy sites like InfoWars, the Gateway Pundit, and Big League Politics.

While it’s concerning to see how damaging these lies can be, to the falsely accused and the person whose identity is stolen as a vehicle for fake allegations, the pushback was bipartisan—protecting the integrity of a movement that has given space for victims of sexual assault to bravely come forward.

Kelly said he will issue a full statement in due course.