The political operative was plugging a group he represents while he was trying to smear Nancy Pelosi.

Blundering pro-Trump operatives Jacob Wohl and Jack Burkman were supposed to hold a press conference regarding House Speaker Rep. Nancy Pelosi (D-Calif.) and accusations of “drug abuse” on Monday. But the CEO of a drug treatment center, which Burkman represents, said she was wary about making something like this a public matter.

UPDATE: We regret to inform everyone that 25 mph gusts are in the weather forecast for tomorrow

Accordingly, the press conference has been postponed until Monday at 2:30 PM

In an interview with the Daily Dot, Bernadette Cattaneo, president and CEO of the Lakes Treatment Center in California, warned against falsely accusing people in addition and making that information public. According to lobbying disclosure forms, Burkman represents the treatment center, which is located two hours outside San Francisco.

According to Cattaneo, she “doesn’t know politics” but stated the only “conspiracy theory I care about is the insurance companies not providing treatment to those with mental health issues.”

Burkman and Wohl had long planned to accuse Pelosi of being addicted to multiple drugs, claiming her “dealer” would come forward to speak to her use of narcotics. No alleged drug dealer was present at the presser.

While accusing Pelosi of drug use briefly came up, the two took an unexpected shift to accuse Cruz of cheating on his wife, Heidi Cruz, with a mistress. Before the duo jumped into Cruz’s accusations, they stated that Speaker Nancy Pelosi ”beyond a shadow of a doubt” takes Percocet, an opioid, daily.

Burkman stated that he knew of a drug treatment center in which could be of help to the Speaker of the House. What he did not mention was that he also represents the facility.

The pair began by talking about their allegations against Nancy Pelosi. They were planning on doing a presser introducing a guy as her "drug dealer" but kept postponing that – and then it didn't happen.

Burkman says he has a "great" treatment facility to put @SpeakerPelosi in. pic.twitter.com/B9LezicOXS

The press conference, which was billed as having Proud Boy security guards, was drowned out by hecklers but did feature a guest appearance from Milo Yiannopoulos.

At the presser, late on Monday, neighbors of Burkman continued to voice their opinions against pressers being repeatedly held in the Arlington neighborhood, with the Arlington PD arriving on the scene to defuse tensions.

Kirby Clark, a spokesperson for the Arlington Police Department, told the Daily Dot, “there were no requests for police presence at this event ahead of time,” but added that “during the event, police were dispatched to the report of loud noise and traffic obstructions.”

When asked if Burkman’s political smears help the Lakes Treatment Center, Cattaneo replied, “quite frankly, I need a big mouth, he appears to have a big mouth, big mouths aren’t always bad.”

But when asked about Burkman’s allegations of Pelosi taking drugs, Cattaneo had a warning for Burkman.

“Well, I think if somebody has an opioid issue, there’s HIPAA (Health Insurance Portability and Accountability Act of 1996) compliance for that, so I don’t know where he’s getting that information, but I would hope he wouldn’t throw out somebody’s diagnosis, or something that they need help with, if they weren’t asking for it,” Cattaneo said in a phone interview to the Daily Dot.

Burkman responded via email, stating that he believes “Nancy has a serious drug problem.”

However, he didn’t go forth with the charge as planned.

When asked about any conflict of interest or if the presser was to promote the drug treatment centers he represents, Burkman stated, “No, no conflict between the speaker’s drug addiction and our helping treatment centers. In fact, we have a few good centers that can give her the help she needs.”

The Lakes Treatment Center bills itself as giving “individuals struggling with substance misuse the best possible chance at recovery by providing the highest-quality and most effective services possible.”

Cattaneo told the Daily Dot that while she couldn’t speak about specific clients and if Pelosi had ever been to the facility, due to HIPPA, she could confirm that Burkman has never referred anyone to the Lakes Treatment Center. According to her, she hired Burkman to work on a “drug problem.”

In an interview with the Daily Dot at the Trump Hotel in Washington, D.C., Burkman stated, “I would recommend, given what I know of the speaker, that the speaker go see Bernadette for treatment. I would think that’s a good idea.”

Burkman, who has smeared 2020 Democratic presidential hopefuls with fake sexual assault allegations, claims in disclosure filings that his services for the Lakes Treatment Center include, “solving a public relations crisis.”

In the calendar year of 2019, the Lakes Treatment Center has given Burkman’s lobbying firm $20,000.

Burkman began servicing the Northern California based treatment center as a client in February of 2019, according to filings.

Cattaneo told the Daily Dot that she has never been told about any political giving to candidates or members.

At the press conference held Monday in Burkman’s driveway, the duo dismissed questions from the Daily Dot regarding the Lakes Treatment Center.

When Burkman was asked about the role of Wohl at his firm, Burkman claimed in an email to the Daily Dot that Wohl “assists us with various projects,” “helps with client development,” and “is an invaluable resource.”

A corporate D.C. lobbyist who spoke to the Daily Dot on the condition of anonymity explained that Burkman and his firm have “no influence in Washington, D.C.” due in part to their “political hoaxes,” while adding that most of Burkman’s colleagues in the lobbying business “laugh at him.”

In an investigation by the Daily Dot, filing records show that Burkman raked in nearly $884,000 from his clients in 2018 and $461,000 so far in 2019. Notably, Burkman has given nothing in political contributions to either Democrats or Republicans candidates dating back to 1998 to the present, third quarter of 2019.

Burkman stated to the Daily Dot that he has given to political candidates and members, but “we simply don’t comment on this.” 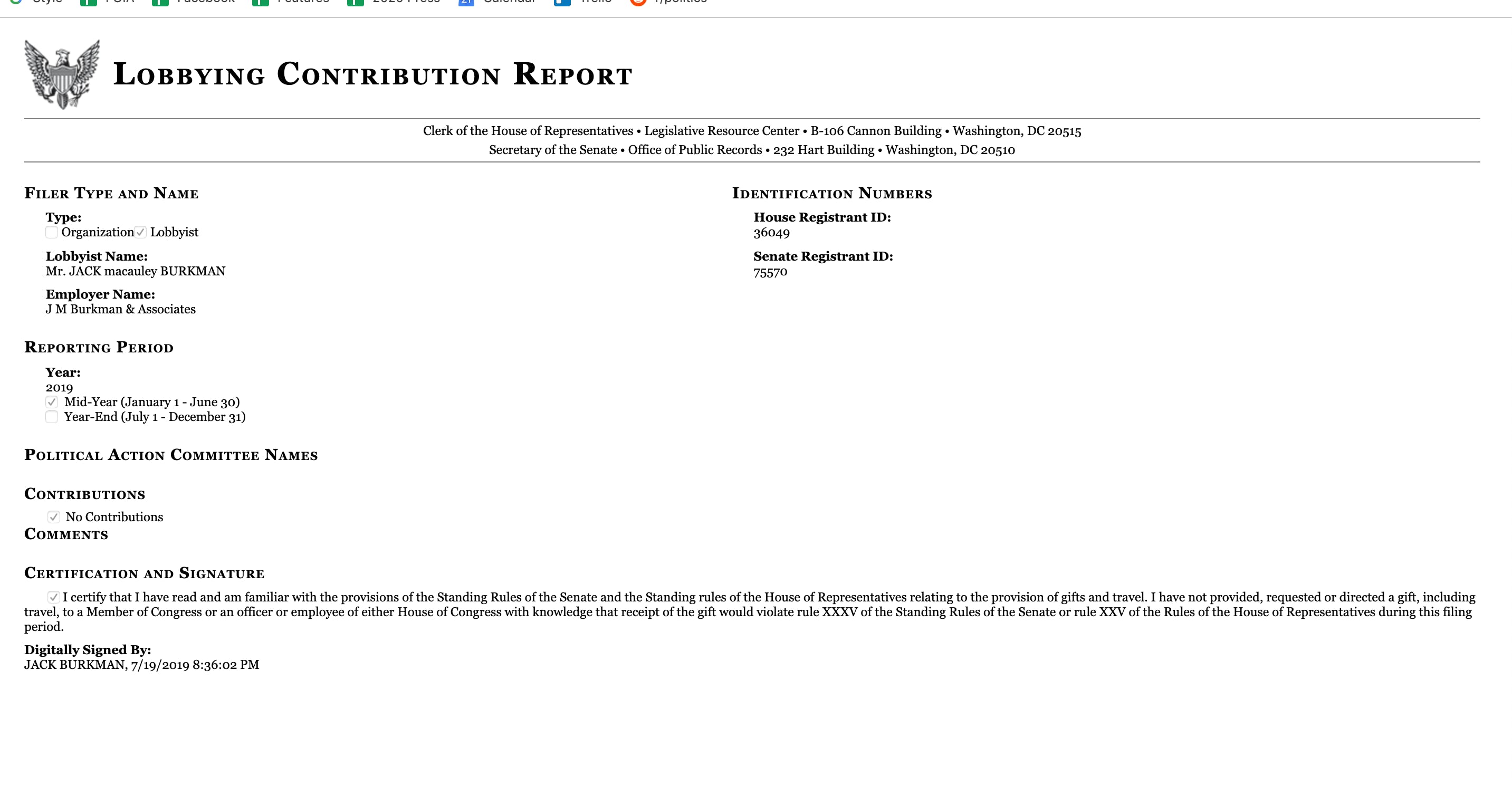 When asked if a factor accounting for Burkman’s low credibility was not contributing to candidates seeking office, the source told the Daily Dot that “political contributions are tied directly to your ability to be effective at carrying out the agenda of your clients.”

Another client is Colorado businessman Steve Warnecke, who has given Burkman over $43,000 dollars in the past year in the hopes of Burkman securing him an ambassadorship.

While Warnecke told the Daily Dot he was unaware of the Burkman’s participation in political smears, Burkman claims that he “enjoys our political activities.”

Warnecke, in an interview with the Daily Dot, said he had no “familiarity” with the recent smears by Burkman while telling the Daily Dot he wanted to know more about what occurred before commenting further.

Burkman’s firm, JM Burkman & Associates, according to lobbying disclosure forms, has two other lobbyists servicing clients, Earle Munns and Ralph Palmieri, who were both contacted for comment for this story, but did not respond to multiple attempts.

Burkman stated that he is “the sole partner” at the firm.

Earle Munns, who is a registered lobbyist at Burkman’s firm, according to his LinkedIn, is also currently the senior vice president of AC Technologies, which has been a client of JM Burkman & Associates dating back to August of 2008. The Daily Dot contacted AC Technologies for comment, but no response to questions was issued.

Burkman declared in a separate email, one of many emails to the Daily Dot that, “Earles [sic] company AC Technology has been a client of our firms also Earle himself has lobbied with us on a variety of lobbying ventures that we have worked on together.”

One of the clients Burkman allegedly services, the “Desert Lakes University,” does not have an operational phone number or existing website. The Daily Dot reached out to an email posted to a supposed Facebook page featuring Clipart photos of students but did not hear back.

Burkman claimed to the Daily Dot, “Desert Lakes is an educational venture seeking federal funding it is an early stage enterprise we are helping with some other political needs as well it has an outstanding leader.”

In the Trump Hotel interview, Burkman would not identify what state the company was located, merely stating “it’s in the Southwest.”

The university has paid Burkman over $61,000 for lobbying on issues that, according to filings signed by Burkman, entail concerns regarding “online education in Congress and at U.S. Department of Education.”

Burkman’s most recent filing from Oct. 15 shows that he is now lobbying on behalf of ​Alpine Securities, a Salt Lake City-based “securities firm” that is faced with a complaint about “allegedly converting and misusing customers’ securities, including implementing a series of exorbitant and arbitrary fees.”

In a separate email to the Daily Dot, Burkman claimed he has “a bustling PR practice,” but he will not discuss it.

The DC Bar told the Daily Dot that Burkman is in its system as an active attorney, but he is on “administrative suspension” because he hasn’t paid his dues for 2019. In an email to the Daily Dot, Burkman claims to have fixed the situation by paying his dues.

Elevations Health, another drug and alcohol treatment center, which Burkman claims to represent in Washington, D.C., was contacted by the Daily Dot, but their phone number was disconnected.

Berkshire Capital Management, when called by the Daily Dot, declined to comment.

All clients of Burkman’s firm were attempted to be contacted by the Daily Dot via phone, email, or Facebook Messenger for comment, but many never returned comments, emails bounced, or there were disconnected phone lines.