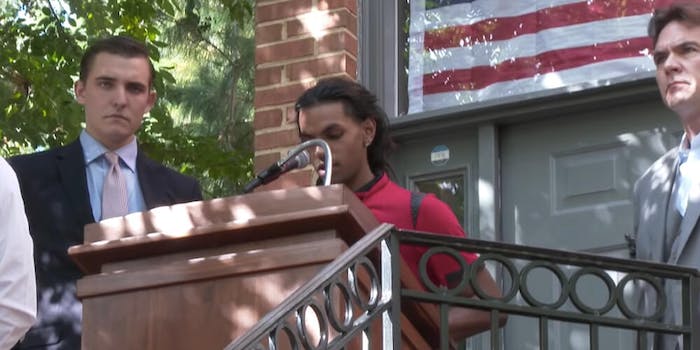 The actor thought he was auditioning for a Spike TV show and that everyone was an actor.

Jacob Wohl and Jack Burkman’s latest scheme has hit yet another snag.

The far-right conspiracy theorists hosted yet another failed press conference last week, this time attempting to smear Sen. Kamala Harris (D-Calif.) with testimony from someone claiming to be her personal trainer and former lover.

Now, the man who Wohl and Burkman had speak against the Democratic presidential hopeful has come forward to say he was hired off Craigslist to take part in a scripted performance.

Sean Newaldass cited a Craigslist ad calling for a “performance art” actor in the DC area in his revelation to the Daily Beast.

“We are seeking a male actor in their early 20’s to early 30’s for basic performance art acting in Washington DC. We are paying $250/hour. Please reply with your name, contact info and a few pictures of yourself. We are hiring now!” the ad reads.

Newaldass said he didn’t know that Harris was a real person, let alone a politician.

“I thought I was acting for a role in a movie, like a role in a TV series,” he said. “I thought everything was staged, I’m thinking everyone is an actor.”

The unwitting pawn in yet another one of Wohl and Burkman’s ridiculous smear campaigns claims the two told him the event was an audition for a show on Spike TV (a network that no longer exists) and detailed first seeing the script at Burkman’s house. But he says the version that was later emailed to him was actually filled with allegations against former Vice President Joe Biden, so it would seem we know what joke of a “press conference” Wohl and Burkman plan on holding next.

After the press conference, Newaldass says all the comments on his social media accounts made him realize there was no audition and that he had been used in a clumsy attempt to destroy a politician. That’s when he decided to come forward.

And he isn’t the first. Before the event even began, the man ultimately introduced by Wohl as a reverend told the Daily Dot that he was not actually a reverend and had been promised $175 to participate.

Wohl and Burkman have been the brainless puppeteers behind a number of previous attempts to smear Democrats, along with former Special Counsel Robert Mueller. Every attempt has dramatically backfired, with the people the two hired to lie immediately turning on them or having their own past statements disprove what Wohl and Burkman had them say.

With literally no one on the planet trusting a single word either of these hucksters have to say, one has to wonder what their actual goal with these “press conferences” are. But with protesters constantly showing up at Burkman’s house during these events, playing banjos, bagpipes, and dressing up like corn, maybe this is just their version of a neighborhood block party. Though it’s undoubtedly one his neighbors must be getting quite sick of.