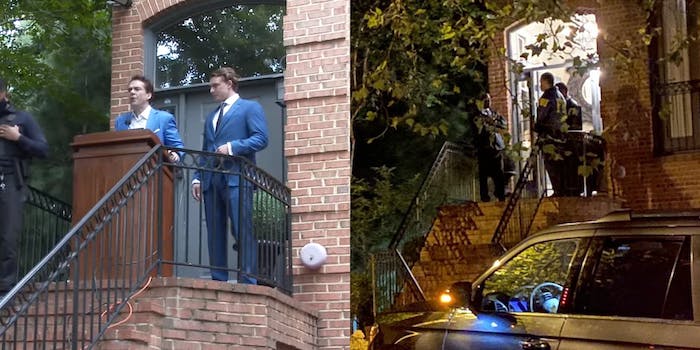 Jack Burkman says his house was raided by the FBI, but, like, come on

There's reason to be skeptical.

Disgraced Washington, D.C., lobbyist Jack Burkman allegedly had his Arlington, Virginia, home “raided” by agents with the FBI early on Monday morning. Questions immediately arose about whether the raid was legitimate or a paid skit put together for attention.

Burkman’s associate, blundering GOP operative Jacob Wohl, claimed to the Daily Dot that the raid isn’t a set-up aimed at tricking the media, which their press conferences held at Burkman’s same Arlington home often hoped to accomplish. Wohl has routinely lied about his intentions with those pressers, and Wohl and Burkman have paid people to act and lie in front of the press before.

The Twitter account that posted the initial FBI “raid” photos and videos didn’t have any prior tweets to posting about the raid. The account was created in August.

In the tweets, FBI “agents” are seeing marching out boxes.

A recovery email for the Twitter account goes to ja*******@gmail.com, which character count lines up with “Jacob Wohl.”

Burkman didn’t respond to the Daily Dot via phone for an interview but did email the following statement.

“We have been given docs concerning the Mattis-Holmes relationship which we will reveal… people like Mattis have a lotta friends,” Burkman said in the email to the Daily Dot. “But we will do the right thing.”

A press release sent to the Daily Dot on Friday claimed that Burkman and Wohl were going to out former Secretary of Defense James Mattis as “an unindicted co-conspirator in Theranos.” In typical Burkman-Wohl fashion, the release claimed that Mattis and Holmes had an affair. “It started as sexual involvement, then broadened into fraud,” Wohl said, according to the release. There is no evidence this is true or that the FBI is investigating this.

Wohl and Burkman have spread smears about 2020 Democrats operatives and been accused of running illegal scams, which could be a pretext for a raid from federal officers. But it could just as easily be a publicity stunt.

A representative for the FBI Washington Field Office told the Washington Post, “We cannot confirm that at this time” when asked about the raid. The FBI did not respond to the Daily Dot’s request for comment. The Post’s only source for its story on Burkman’s raid was Burkman himself.

It’s worth viewing this raid with skepticism, especially considering the Twitter account that announced it. Additionally, a shirt being worn by one of the FBI operatives appears to match up with one available on Amazon.

Update 1:07pm CT: In a story published by the Daily Beast, a man named Tommy Abraham said he responded to a Craigslist ad calling for actors to portray FBI agents and that the raid was staged by Wohl and Burkman.

According to the Daily Beast, Abraham was told he would be paid $400 in for his work, but after the filming was not reimbursed.

Following publication of the Daily Beast’s story, the Daily Dot spoke with Wohl who stated he had to go return “rental cars” and Burkman who sounded proud to have tricked the Washington Post with their fake “raid.” “We don’t hoax anyone,” Burkman also claimed, adding “you’re talking about the Washington Post like a bible!” “Its not the Bible!,” he added.

The lobbyist then hung up on this reporter.

In addition, the FBI told the Washington Post it was not involved in the raid at all. The FBI “was not present at the specified location for law enforcement activity,” a spokesperson said.