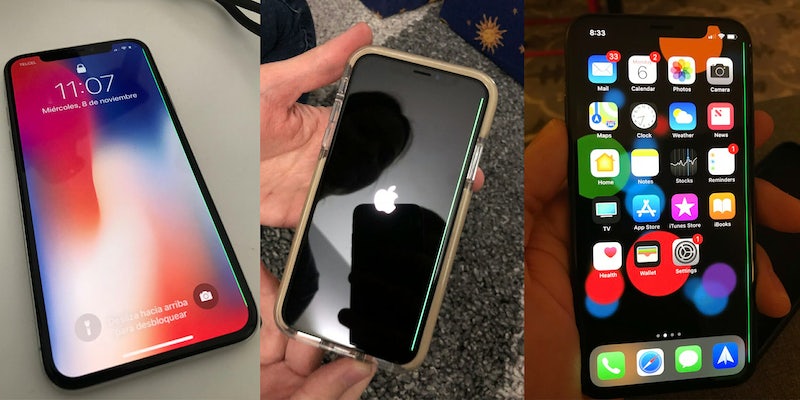 Apple is reportedly refunding users at no extra charge.

Users are reporting yet another problem with the iPhone X, this time, with its new OLED display. Images showing an unsightly green line on the phone’s screen are popping up on numerous social media sites, including Twitter, Reddit, and Facebook. The issue is already being dubbed the “green line of death.”

The display glitch, first reported by MacRumors, generally appears toward the right or left-most set of pixels but can pop up anywhere. Users say the problem appears spontaneously, not right out of the box, and isn’t fixed with a restart. For now, it appears the problem only affects a small number of users (MacRumors read “at least” 25 reports), so we’re not in Galaxy Note 7-territory just yet.

Here’s how it looks.

@AppleSupport my iPhone X already has an issue.There is a green bar along the right hand side of the phone.Restart doesn’t fix. Known issue? pic.twitter.com/Hp3HKhVMfs

The reports come just a day after Apple fixed its embarrassing ‘I’ keyboard problem and the same day it acknowledged an issue that makes the X unresponsive in cold weather.

It shouldn’t come as a surprise that Apple has faced so many issues with its 10th-anniversary device. The iPhone X is unlike any phone Apple has ever produced. It’s filled with first-time hardware, including the Samsung-supplied OLED panel.

That’s not to say Apple isn’t to blame—these sorts of issues ideally get hashed out during testing prior to the device’s worldwide release. But if numerous reports are accurate, Apple has been hurrying to make up for OLED display (and Face ID) supply shortages.

Users can only hope this isn’t a hardware problem and can be fixed with a software update. However, Apple is already reportedly replacing affected units free of charge and collecting information on them for its engineers.

Apple has not yet acknowledged the issue. We have reached out to the company to learn more and will update this article if we hear back.