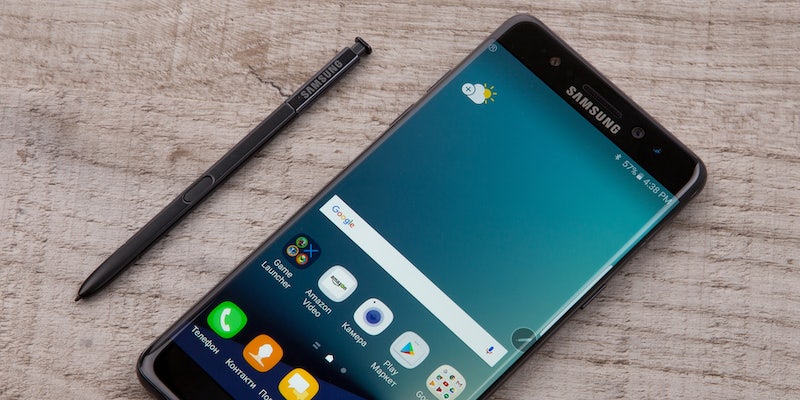 This comes after a series of explosions and fires from replacement phones meant to fix the problem.

Samsung has confirmed that it would officially end production on the Galaxy Note 7.

Reports surfaced that the company planned to halt production on the smartphone Sunday night after a series of explosions were reported, including one in which the company attempted to stop a customer with an exploding phone from going to the press. (The customer found out what Samsung had tried to do after a text was sent to him by mistake.)

The company is now recalling all of its Galaxy Note 7 smartphones, even the models the company had replaced after they started exploding last month. Since the original recall, a phone caught fire on an airplane and another sent a 6-year-old boy to the hospital; by one estimate, five replacement phones exploded in the past week.

Samsung is urging people to immediately shut down their phones and return it to wherever they originally purchased it. Customers then have the option to swap it for a Galaxy S7 or a Galaxy S7 edge (as well as the ability to replace Galaxy Note 7-specific accessories) or obtain a refund.

Prior to the recalls, experts had expected the Galaxy Note 7 to sell 20 million devices after critics had given it positive reviews.

Samsung’s statement is included below in its entirety:

[quote] We are working with the U.S. Consumer Product Safety Commission (CPSC) to investigate the recently reported cases involving the Galaxy Note7. Because consumers’ safety remains our top priority, Samsung will ask all carrier and retail partners globally to stop sales and exchanges of the Galaxy Note7 while the investigation is taking place.

We remain committed to working diligently with the CPSC, carriers and our retail partners to take all necessary steps to resolve the situation. Consumers with an original Galaxy Note7 or replacement Galaxy Note7 should power down and take advantage of the remedies available, including a refund at their place of purchase. For more information, consumers should visit samsung.com/us/note7recall or contact 1-844-365-6197.