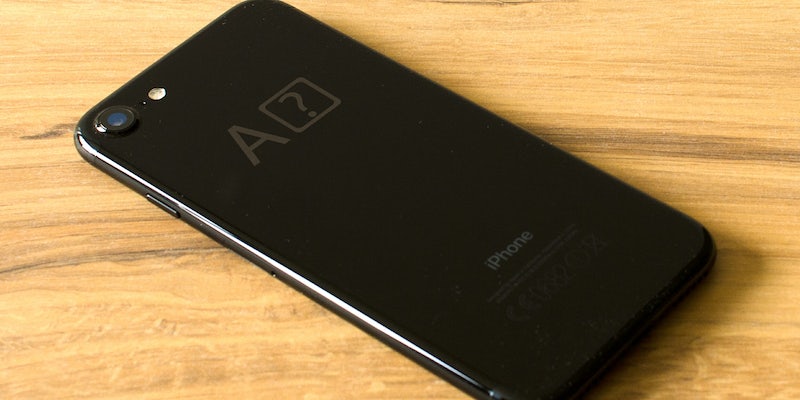 Apple clearly wants its users to stop being so egocentric. A bug in the latest version of iOS is preventing iPhone users from typing the letter “I”—the 10th most common word in the English language.

A number of users are reporting on Twitter that autocorrect is replacing the letter “i” with “A [?].” The issue started showing up last week after Apple pushed out its iOS 11.1 update, which added new emoji and a fix to the dangerous vulnerability found in the protocol of all modern Wi-Fi networks.

Reddit user TheCravin documented the issue on Reddit, noting how every time they type “i” it gets replaced by a random operator character like “A,” “#,” or “!” followed by the Unicode symbol [?].

Apple’s Twitter support page got bombarded with angry tweets over the weekend as users searched for answers.

I️ paid @Apple too much money to not be able to see the letter “I” on my phone. My env2 could do that….

this autocorrect “i️” thing is becoming too much to handle. somebody better fix this before i’m on the front page of the news @Apple

Others took a more pragmatic approach, coming up with clever methods to bypass the problem.

This is the year we have to refer to me, myself and eye because Apple got rid of I️

Apple admitted the bug is affecting keyboards on iPhone, iPad, and iPod Touch that have been updated to iOS 11.1, though not all devices are experiencing problems. We were unable to replicate the issue on an iPhone 8 Plus. It’s unclear how many users are affected, but the bug forced Apple to post a dedicated support page on its site that describes a workaround.

To temporarily fix the issue, follow this path: settings>general>keyboard>text replacement. Then tap the “+” key and type uppercase “I” for phrase and lowercase “i” for shortcut. You could also turn off predictive text and/or autocorrect and be forced to proofread again.

These fixes aren’t perfect but they’ll do the trick until Apple issues an update to A[?]OS 11.1.

If you’re not seeing the prompt, you can go to Settings>General> Software Update to manually update your iPhone.