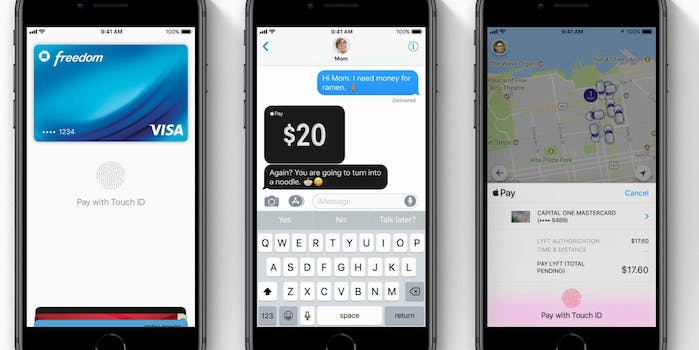 You don't even have to download a separate app to use it.

Watch out Venmo, another tech giant is coming for you.

The concept isn’t new, in fact, the App Store contains a number of similar peer-to-peer payment services, like Venmo and Square Cash. Unlike those payment systems, Apple Pay Cash isn’t a dedicated app. Instead, it sits directly in the company’s main “Messages” app so it will be seen by tens of millions of iPhone users once it goes live.

You will soon see a new Apple Pay logo appear in the iMessage app drawer next to Animoji. Press on it to send money from credit or debit cards and receive funds from any of your contacts. All money you transfer will come from credit or debit cards that you’ve already saved in your Apple Wallet or from the new Apple Pay Cash card. Debit and Apple Pay Cash card transfers are free but you’ll have to pay a standard 3 percent fee when using a credit card.

Money from an accepted transfer is deposited into the Apple Pay Cash card in the Wallet app and can be used wherever Apple Pay is accepted.  You can send money from the Pay Cash card to a checking account to use those funds at stores that don’t accept Apple Pay. The Pay Cash card is more like a prepaid card than a full-on credit or debit card. Its main purpose is to allow Apple to process transactions immediately. The card also records all transactions, including money sent, received, and spent on Apple Pay.

Apple Pay Cash works with Apple Watch and Siri—all you need to do is tell the assistant, “Hey Siri, send Phillip $3,000.” And Apple is using some smart algorithms to add a pay icon next to an iMessage if it thinks you’re chatting about money. For example, if I write, “Hey Dave, you owe me $20 for those soccer tickets,” a little icon will appear next to the message that he can press to immediately transfer funds.

The interface for the beta is very simplistic. Money requests appear as all-black message bubbles with the requested amount in white. Requests you receive look similar except for a “pay” icon you can tap to instantly send money.

There are some rules for sending and receiving money through iMessage. You have to add a minimum of $10 per transaction but can’t add more than $3,000 to your Pay Cash card. And you must send or receive at least $1 but no more than $3,000.

Apple Pay Cash is packaged in the iOS Beta 11.2 but you can only use it if you have two-factor authentication set up. The payment system will be officially released to U.S. users first when iOS 11.2 officially drops later this year.