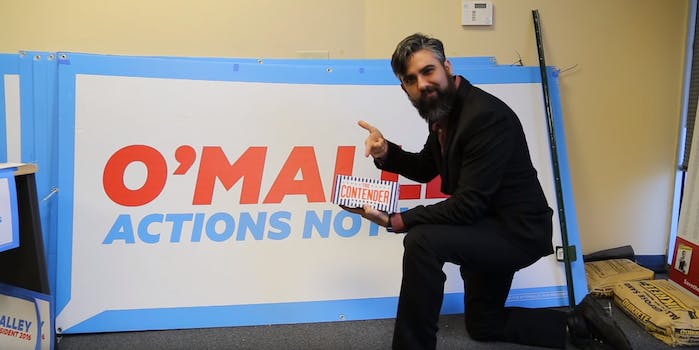 Presidential campaigns are notoriously unpredictable affairs, but staffers at the 2016 candidates’ Iowa campaign offices probably didn’t expect the creators of a viral, election-themed card game to show up and drop off free copies of their product.

It was understandable, then, that the two men who created The Contender—which plays like Cards Against Humanity for political debates and raised nearly $150,000 on Kickstarter—encountered a mix of enthusiasm, skepticism, celebrity status, and brusque dismissal as they visited campaign after campaign in Des Moines, Iowa, over the past few days.

“The baseline, which we pretty much got from Chris Christie, Jeb Bush, Donald Trump, Mike Huckabee…was just, ‘Hey man, that’s really cool, we’re really excited, thank you so much, we’ll pass this on to the volunteers when they’re not on the phone banks or when they’re done doing their lunch. This will be great. They’ll love it,’” Justin Robert Young, who created the game with his friend John Teasdale, told the Daily Dot. “And then we had the really, really goods, and the really, really weirds.”

“We walk in, it’s this super-young crowd, everybody’s very chilled-out but, certainly, intense about the cause,” Young said. “We’re chilling out in the lobby talking to people about [The Contender], and all of a sudden, I realize that the person who’s very interested in the game is Justin Long, the actor of former ‘I’m a Mac/I’m a PC’ fame.”

The Contender team visited every Iowa campaign headquarters, leaving copies of their game with staffers for every candidate except former HP CEO Carly Fiorina and Ohio Gov. John Kasich, who do not have offices in the state. (Fiorina’s Super PAC did set up shop in Iowa, but as Young put it, “We’re not giving ’em to Super PACs.”) Sanders’ team was the only one to invite them in beyond the lobby.

“Part of it was because they were about to have a big press scrum for Bernie,” Young said. “Bernie actually came in and talked to the press while we were there. But they were just so nice and so welcoming and such a great hang.”

“But even then,” he continued, “I think Ben Carson’s campaign gets the edge.”

Every time they arrived at a campaign office, they had to first explain that they were neither selling something nor reporting for a news outlet. After that, Young said, staffers and volunteers at almost every office “kind of warmed up.” But among Carson’s people, something special happened.

“At the point that they warmed up at the Ben Carson campaign, we immediately became the celebrities,” Young said. “They were so nice. The dude we were talking to was like, ‘Oh wow, you guys are inventors! Can I get my picture with you?’ And so we stood up, and we just took pictures with their staff. It was amazing. We walked out feeling so good about ourselves.”

Things didn’t go so well when Young and Teasdale visited Rick Santorum‘s office. “It’s not necessarily surprising,” Young said, “and it’s partially our fault.” The two donned what they called “crazy old coot” hats, which Young described as “a mesh trucker cap that we just put all of our pins in. The standard picture you’d see in a stock photo of a rally [of an] older gentleman sitting in a lawn chair with a sign and a hat.”

Campaign workers “basically barred us from the door.” A “very terse” staffer took the card game and shooed them away almost immediately. “Like vampires,” Young said, “we were denied passing the threshold into the Rick Santorum office.”

Although every stop on their whirlwind campaign-office tour had the potential to be awkward, Young didn’t get nervous. He’s used to the pressure. In addition to co-creating The Contender, he co-hosts the comedy podcast Night Attack and the magic-themed podcast Weird Things, and he does his own politics show, appropriately titled Politics Politics Politics. He is not someone who, in his words, is “easily made awkward.” (Full disclosure: I’m a fan of their work.)

“The only campaign that I thought got a little weird,” he said, “was probably the most awkward, and that was Hillary Clinton.”

Young and Teasdale handed off the game just fine, but things went downhill when they tried to take a picture inside the office.

“It’s the Internet—pics or it didn’t happen,” Young said. “So we’ve been trying to take pictures in all the lobbies at the very least, or at least outside, to show that we were at each location.”

They asked a wary campaign staffer if it was okay.

“So he’s like, ‘Well, so what is this—this is a business?’ We’re like, ‘Well, yeah, I mean, I guess technically. We Kickstarted it, and now we’re selling it. We flew out here to promote it. So yeah, I guess it’s a small business.’ And he’s like, ‘And you want to take a picture?’ I’m like, ‘Yeah, I mean, just to prove that we were here.’ ‘Hmmm. Yeah, you’re going to have to call our press secretary.’”

This was clearly a brush-off, but Young pressed on. Eventually, he won permission to snap a photo inside Clinton’s Iowa domain. But there was a condition: “Alright, listen,” Young said he was told, “you can take the picture. However, you must put, on the picture, that Hillary Clinton does not endorse or support your game.”

Young said he couldn’t entirely blame the Clinton campaign. “It’s a tight race,” he said. “Nobody wants to do anything that could affect where they are. So I can understand where the shields went up. But, at the end of the day, the fact remains that the only candidate to explicitly tell us that they do not support or endorse The Contender is Hillary Clinton.”

In general, though, the Contender crew got a nice reception from Iowa staffers. Some campaign offices, he said, felt like the embodiment of the candidates. In others, the reception wasn’t what you might expect if you only saw the candidates on cable television.

“Ted Cruz gets a reputation, outside of the evangelical crowd, for maybe being a little cold or calculated,” Young said. But when they visited Cruz’s Iowa headquarters, “his staff was very enthusiastic and very excited.”

In addition to visiting the campaigns, Young and Teasdale organized five Contender Card Caucus events in Des Moines. People who intended to caucus for one of the candidates played the game, and for each round that a pledged caucus-goer won, a corn kernel was placed into the jar for that person’s candidate. On Monday morning, with caucusing less than 12 hours away, Young and Teasdale counted the kernels.

Bernie Sanders won, garnering 52 percent of the Card Caucus kernels. Young and Teasdale brought a massive novelty check, in the amount of “318.9 million American hearts and minds,” to Sanders’s office.

Young called Sanders’s Card Caucus victory “a landslide.” Donald Trump finished in second place with around 13 percent of the kernels. At Sanders’s office, a staffer with the national campaign came out and posed for a picture with the giant check.

Asked whether he thought The Contender had made its mark in Iowa, Young suggested that, in a race as close as the Democratic face-off, it had the potential to tip the scales.

“Listen, this Hillary Clinton–Bernie Sanders race is within the margin of error,” he said. “Remember, Rick Santorum and Mitt Romney famously, last cycle, came down to single-digit votes. Let’s say, theoretically, people [came] out to the Card Caucus, and all of a sudden they have a good reaction—they see Bernie Sanders is doing well—then absolutely.”

“If the Contender bump is only 12 people, that could be the 12 people that makes the difference for Bernie Sanders’ campaign,” Young said. “So, you know, who knows? Obviously, this is something that’s a little tongue-in-cheek for us, but without a doubt—we could make a difference. Things are so razor-thin right now.”