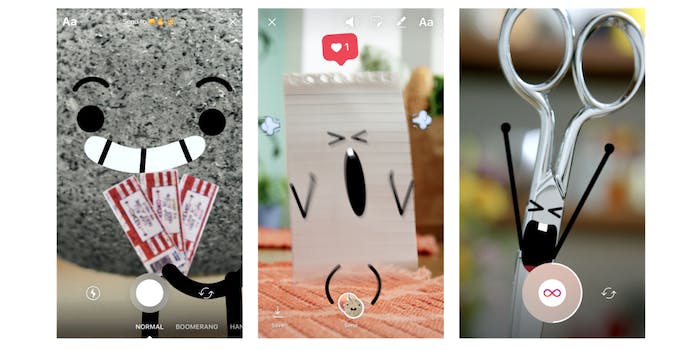 Instagram may be planning a few new features to further take on Snapchat.

Deep inside Instagram‘s Android Application Packages (APKs) are hints that the app’s future may include voice and video calling.

Sometimes, a peek inside the source code or development kit of an app can give a glimpse of features its developers have been working on but haven’t yet released. Developers recently discovered files and icons for “Call” and “Video Call” within the Instagram APK, TechCrunch reports. The APK is publicly available, but contains a large amount of code and information, which can make it tedious to sift through.

To better compete with social media upstart Snapchat, Instagram has doubled down on its chat-related features. Last April, it introduced Instagram Direct, a hub for chatting with your friends in the app. In Instagram Direct, you can send texts, photos, videos, and emoji reactions. You can also send normal media messages, as well as disappearing ones—a concept first made famous by Snapchat. In December, reports surfaced that Instagram was testing out a standalone app version of Instagram Direct.

Adding voice and video calling to its main app—or more likely its standalone Instagram Direct app—will bring Instagram up to speed with pretty much all of the features Snapchat offers. Beyond direct messaging, Instagram also borrowed the Stories format from Snapchat. Instagram Stories has since grown to be even more popular than Snapchat’s version, according to recent metrics.

Instagram did not comment on the discovery of these voice and video calling icons in its APK.

While it’s unclear if or when Instagram will launch voice and video calling capabilities, history suggests it could be soon: The last time TechCrunch found a potential new tool in the APK (the addition of GIPHY GIF sharing), the feature launched shortly thereafter. Considering the reaction to Snapchat’s recently redesigned app, Instagram’s timing to lure users away from its competitor couldn’t be better.