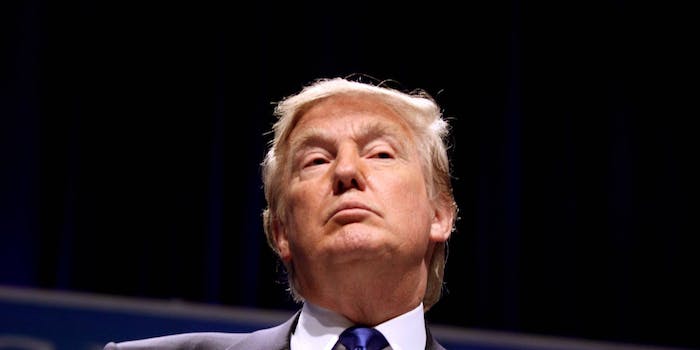 Between reports of Russian hackers and President-elect Donald Trump‘s swath of cabinet appointments, his detractors may feel helpless in the weeks before the inauguration. However, a group of former congressional staffers have put together a guide to help even the most dissuaded of spirits resist Trump.

“Indivisible: A Practical Guide for Resisting the Trump Agenda,” outlines a series of steps that people can take to organize and challenge Trump and conservative lawmakers over the course of the next four years. For the most part, the guide follows example of the Tea Party, which resisted the changes of the Obama administration. 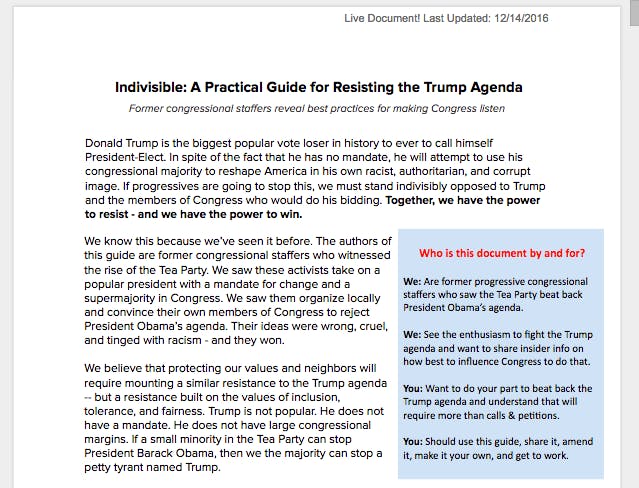 Screengrab via “Indivisible: A Practical Guide for Resisting the Trump Agenda”

According to the Google document, which was first shared on Wednesday, the guide was put together by former congressional staffers who watched Tea Party activists organize locally during President Barack Obama‘s two terms.

“Their ideas were wrong, cruel, and tinged with racism—and they won,” the document reads. “We believe that protecting our values and neighbors will require mounting a similar resistance to the Trump agenda—but a resistance built on the values of inclusion, tolerance, and fairness.”

The guide is lengthy but relatively straightforward, breaking down the fields of activism into chapters and breakout boxes.

Over the course of 23 pages, four chapters explain how grassroots advocacy affected Obama’s influence, how members of Congress can be targeted for change, and how to effectively develop and organize local advocacy groups.

The guide also mentions that the creators developed the document on their own time, without any intent to organize or profit from the guide. In the conclusion the authors write that they created the guide to provide a practical understanding for leading this unprecedented movement.

“This is not a panacea, nor is it intended to stand alone,” the guide reads. “We strongly urge you to marry the strategy in this guide with a broader commitment to creating a more just society, building local power, and addressing systemic injustice and racism.”

Since the guide’s promotion on Wednesday, it’s already picked up significant grassroots-style steam on Twitter.

This is the thing I've been waiting for.
RT don't fav.
Spread it like wildfire.
Then get started w yr friends.https://t.co/8DURjlUTWH … pic.twitter.com/msS3FrrLyL

I found this "Practical Guide for Resisting the Trump Agenda" very useful. Hope you find it useful, and use it. https://t.co/Y6kO7S0Ayc

This guide to resisting PEOTUS is pretty good. https://t.co/Tim6E86Y2p pic.twitter.com/Lf6RPU7wPm

1/ This is the single best and most important thing I have read about how to resist Trump and the GOP agenda. Ithttps://t.co/jONFR7Yrer

The authors of the guide did not immediately reply to a request for comment.