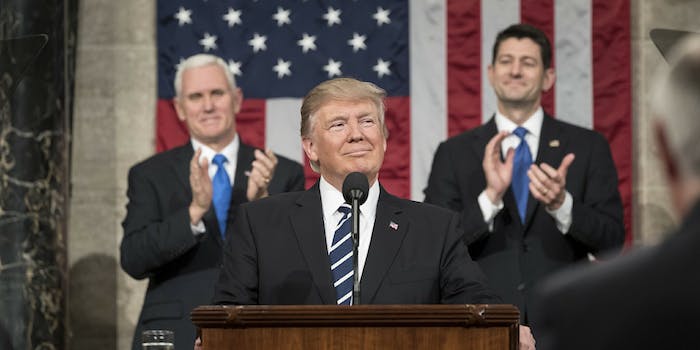 America needs Donald Trump to stay in office—whether we like it or not.

I’ve got some bad news for you, and I hope you’re sitting down. President Donald Trump isn’t going anywhere.

Online oddsmakers are optimistic about the likelihood that Trump will be impeached and removed from office during his first term. Ladbrokes estimates that there’s a 55.6 percent chance that the president will not make it to 2020, marking the first time that the British prediction firm put the smart money on Trump’s ouster. Betfair is split on the issue, putting the president’s odds of getting sacked at 50/50. Polls show that the American public certainly wants that to be true, with a majority of respondents in a Public Policy poll supporting Congressional investigation in response to reports of Russian interference in the 2016 election.

That won’t happen. Although a Trump-free White House is an appealing fantasy, it is a fantasy nonetheless. There simply isn’t the political will for his removal in a Congress that has never been more divided along partisan lines. FiveThirtyEight found that Republicans in the GOP-controlled House of Representatives have sided with the president’s policies 97 percent of the time, a record high. Even Trump’s Republican dissenters—like Arizona Sen. John McCain—don’t have a problem with what the president does. It’s what he says that’s the problem.

Loose lips might sink ships, but they do nothing when a resurgent Republican party will do anything to keep the battleship afloat—even if it means manning a tanker full of holes.

While getting the impeachment of Trump would be immediate gratification for a resistance movement that has called for literally any accountability in the White House, there’s a silver lining to keeping him in the president’s chair: Trump is very, very bad at what he does. An Oval Office with him at the helm is a broken machine, one that’s proven ineffective at targeting undocumented workers, Muslims, and LGBTQ people through federal action. Giving him the boot would allow the Republican-controlled Congress and conservatives throughout the federal government to address these malfunctions by becoming a well-oiled generator of discrimination under a new presidency. Trump might be evil and dumb, but Mike Pence is evil and smart. That’s a terrifying combination.

Millions of Americans have good reason to fear Trump’s dangerous and extremist policies, particularly the minority groups he singled out in his presidential campaign, but let’s face facts: As authoritarian strongmen go, he’s woefully inept.

Despite Republicans controlling both houses of the U.S. Congress, Trump has been unable to repeal the Affordable Care Act—or even come up with a halfway coherent piece of healthcare legislation. Although the president’s generically titled American Healthcare Act managed to pass the House, the Senate elected to rewrite the bill. That could tie up the process for months. Ohio Gov. John Kasich has signaled his unwillingness to support yet another redraft, calling the GOP plan “window dressing” and “inadequate.”

The president, who recently learned that Israel is in the Middle East, is clueless about the basic norms of governing. Trump abandoned a great majority of his most grandiose campaign promises when he found out that they weren’t even remotely realistic. The POTUS, having pledged to build a wall between the U.S. and Mexico to block illegal immigration, signed an executive order in January calling for that project’s undertaking. There’s just one problem: Congress won’t fund it. Riders that would appropriate federal funding to a border wall have been removed from legislation several times, and House Speaker Paul Ryan (R-Wisc.) claimed the wall will be delayed until next year. We’ll see how that goes.

If you’re wondering why Trump hasn’t pursued the Muslim registry that was central to his campaign, it’s because that unconstitutional proposal would likely meet the same fate as his travel ban. Executive orders banning entrants from several Muslim-majority nations, including Syria and Iran, have been repeatedly blocked by the court system.

Trump’s closest advisers, many of whom lack even basic qualifications for their positions, aren’t any better at the game than Trump is. When former Texas Gov. Rick Perry was appointed to head the Department of Energy, he had no idea what the federal agency actually does. Secretary of Education Betsy DeVos claimed that having guns in schools was necessary to prevent students from being attacked by grizzlies. Former National Security  Adviser Michael Flynn and Attorney General Jeff Sessions both lied about communication with Russian leaders, leading one to be removed from his position and the other to be recused from any further inquiries into Russian dealings with Trump. Trump’s Cabinet isn’t just the worst in history—it wouldn’t be fit to lead a middle school PTA.

Under the guidance of a politician who can’t do anything right, the Oval Office is prone to jealousy, infighting, and constant squabbles. Trump’s adviser and son-in-law Jared Kushner and chief strategist Steve Bannon can’t get along. Chief of Staff Reince Priebus can’t keep the White House’s inner factions from going at each other’s throats. Former patrons bitter about not getting rewarded with better gigs keep leaking to the press about Trump’s unusual management style, which includes letting his children make key decisions. No one is awake at the wheel, and the careening clown car keeps finding new cliffs to drive off.

Whether the lucky winner of the presidential sweepstakes is Pence or Ryan, removing Trump from office would allow Washington to reset at the top. Likely to be among the first to go would be Sean Spicer, the gaffe-prone press secretary who can’t lead a simple media briefing effectively. Spicer is as bellicose as he is transparent. Replacing him gives Trump’s successor the opportunity to appoint staffers more skilled at the art of propaganda, a purge that could include divisive figures like Bannon and senior policy adviser Stephen Miller. For all of the Muslim-ban mastermind’s bluster about burning society to the ground, his xenophobic ideas can’t seem to catch fire.

A leadership team with the ability to lead might be good news for people like McCain, who want to see this administration live up the president’s incessant braggadocio. But for all of those who oppose everything the current administration stands for, we need Trump—whether we like it or not. Having a foolish tyrant in office may be an international embarrassment, but it’s better than a tyrant who knows what he’s doing.