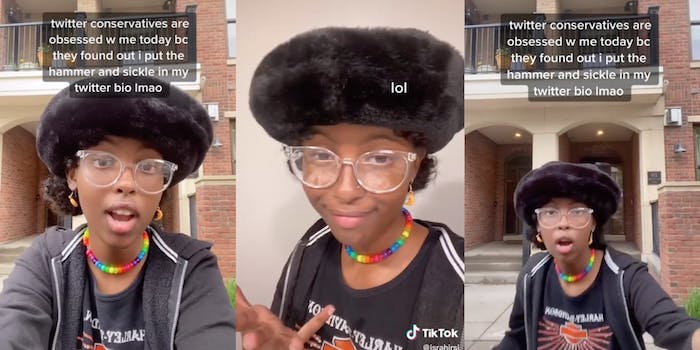 Isra Hirsi, the 18-year-old daughter of Rep. Ilhan Omar (D-Minn.), has responded to recent criticism over her Twitter profile in a video on TikTok.

Hirsi, a climate activist and co-founder of the U.S. Youth Climate Strike, made headlines this week after conservatives noticed a communist hammer and sickle in her Twitter bio.

The discovery led to uproar among prominent conservative figures including Andy Ngo and Rep. Marjorie Taylor Greene (R-Ga.) and even garnered coverage from Fox News.

In a TikTok video uploaded on Thursday, Hirsi showcases screenshots of the story’s coverage as well as the direct messages she’s received from conservatives over the issue.

“Oh look it’s the daughter of a terrorist piece of shit!” one of the direct messages say.

Hirsi can be seen flipping off the camera as the song “Hoes Mad” by Famous Dex plays in the background.

The climate activist also weighed in on the matter in a tweet on Thursday in which she argued that the coverage she received from Fox News made her “sound cool.”

The criticism of Hirsi has been met with pushback from progressives, who argue that the 18-year-old woman should not be targeted for her political views.

A spokesperson for Omar also criticized the attacks on Hirsi in a statement to Fox News.

“Have you no shame? Rep. Omar is an elected official, her child is not,” the spokesperson said. “Also, given the fact that Rep. Omar and her kids receive a significant amount of death threats, this is highly irresponsible and dangerous.”