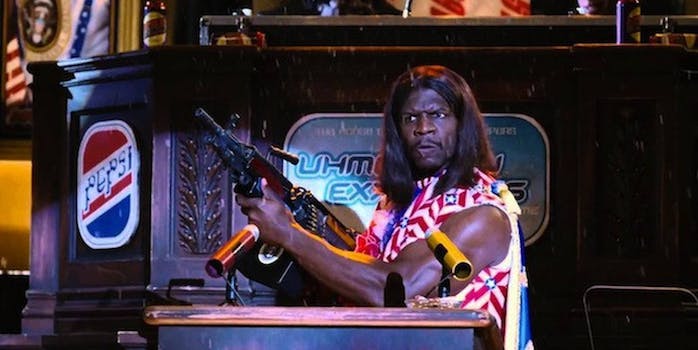 It's got what America craves.

In 2006, a movie co-written by Etan Cohen and Mike Judge called Idiocracy hit theaters. It’s a bleak, absurdist satire about a dystopian future where all of the stupid people had lots of babies, all of the smart people decided they had priorities other than procreation, and America ended up creating another dust bowl by watering with crops with an energy drink instead of water.

The movie, which mercilessly skewered dumbed-down corporatism, was all but abandoned by 20th Century Fox and released in only a small handful of theaters with virtually no promotion. Nevertheless, the film went on to become a cult classic, a cautionary tale about a distant future where the victory of anti-intellectualism was complete.

And then a former reality TV star bragged about the size of his penis during a nationally televised debate and went on to win the 2016 Republican party nomination for president. Suddenly, as Cohen noted, the future predicted by Idiocracy didn’t seem particularly distant.

I never expected #idiocracy to become a documentary.

To celebrate the film’s 10-year anniversary, which just so happens to coincide the with 2016 election, the Alamo Drafthouse movie chain has teamed up with Art House Convergence Theaters and the League of Women Voters to bring Idiocracy back to the big screen for one night only.

“Over the past months, thousands have questioned in social media whether Idiocracy was actually a documentary,” Alamo Drafthouse wrote in a statement. “Mike Judge’s sadly prescient film has transcended its cult classic status to become a vibrant and essential facet of this election conversation”

ALL Y'ALL NEED TO STOP TRIPPIN. CHILL THE F OUT, 'MERICA#CAMACHO2016 pic.twitter.com/qj7UgLU20V

Screenings will be happening at dozens of theaters across the country on Oct. 4. Check out the Drafthouse’s website for details.

At the screening in Santa Monica, California, director Mike Judge—who also satirized/contributed to the low-browing of America with his MTV animated series Beavis and Butt-Head—will be on-hand for a Q&A after the film, which will broadcast live to all the other screenings.

Does Idiocracy traffic in a sort of shorthand cultural snobbery that equates social class with intelligence? Sure! Does it kind of advocate for eugenics, selectively breeding people for intelligence? Kind of! But it’s still funny as hell and it’s hard not to see its echoes in the dumpster fire that is this year’s presidential election.

After Judge started seeing parallels between the film’s former pro wrestler commander-in-chief President Dwayne Elizondo Mountain Dew Herbert Camacho and Donald Trump, who made his fair share of WWE appearances, he considered making a series of Idiocracy-themed anti-Trump ads, but Fox eventually put the kibosh on that idea.