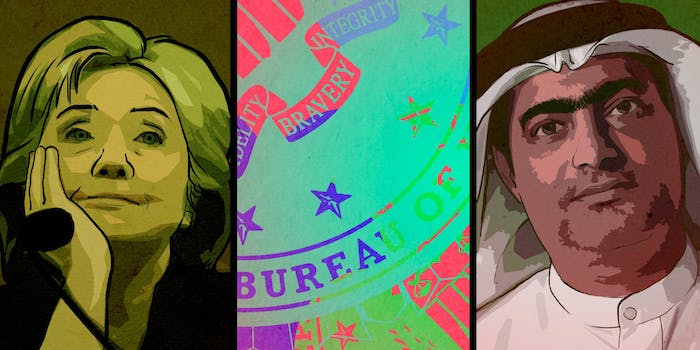 Important news you may have missed on Friday, Sept. 2.

Episode one of the new Layer 8 podcast is live! Meet the world’s most spied upon man: Ahmed Mansoor, a human rights activist also known as the “million dollar dissident.”

The FBI has released the most detailed account of the Clinton private email scandal to date, including documents pertaining to Clinton’s July 2 interview. The release follows the decision of the DOJ not to indict Clinton or her staff, even though FBI investigators determined the State Department administration was “extremely careless” in handling classified material.

Russian President Vladimir Putin, echoing the assertions of WikiLeaks founder Julian Assange, downplayed the theft of DNC emails in an interview, saying what the leak revealed is infinitely more important than how it was achieved. Hillary Clinton said on Wednesday that U.S. needed a “military that is ready and agile so it can meet the full range of threats,” including those which only exist in “cyberspace.”

The judge who sentenced rapist Brock Turner to jail for six months—only three of which he served—is fighting to keep his job. A petition online calling for Judge Aaron Persky to be impeached has amassed more than 1.3 million signatures. If organizers in California get 70,000 handwritten signatures, Persky’s recall will be on the ballot Nov. 2017 at the earliest. Persky launched a website this week to combat the recall effort.

For those interested, here’s the video footage of Turner’s release.

In related news, a 23-year-old babysitter will spend one month in jail after pleading guilty to molesting an 8-year-old boy on two occasions.

Reporter Lyz Lenz provides a look into what one academic researcher has termed “internet banging,” the online activities of American gang members: “We know that young people who live in violent context often use social media to communicate their everyday life. A part of that everyday life is the violence and grief and trauma that they experience.”

Indiana Gov. Mike Pence, the Republican vice presidential candidate, once penned articles under his own name urging media companies to not hire gay writers and editors. Pence also published a number of article as editor of the Indiana Policy Review, which argued against the inclusion of women and gay people in the military, the latter of which one an article argued would lead to soldiers eating feces and showering in other people’s urine. Yummy.

Everything you need to know about the 2016 presidential debates: When, where, and who’s moderating.

For decades, Fox News head honcho Roger Ailes was the most powerful person in conservative media. Here’s the story of how a bevy of female Fox News employees took him down. Or, as they say, fair and balance cometh before the fall –via Gabriel Sherman, New York Magazine

While everyone was busy getting mad about sketchy behavior at the Clinton Foundation, the Trump Foundation has been having its own legal problems –via Steve Benen, MSNBC

But seriously though, tell it to me straight, what’s up with the Clinton Foundation? Politifact separates truth from fiction –via Lauren Carroll, Politifact

12 people killed and 60 more wounded in an explosion in the Philippines –via Tim Hume, Christina Zdanowicz and Merieme Arif, CNN

A South African hacker just rescued from forgotten obscurity the first computer to ever go into space. Feel free to make your own Space Odyssey jokes. –via Cara Giaimo, Atlas Obscura